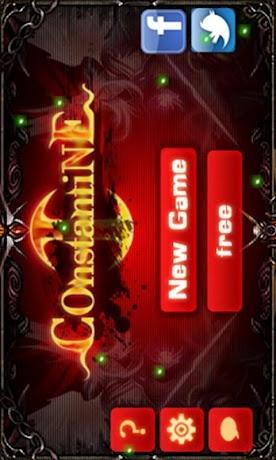 Gameplay features of Constantine I game

In case you are in a hurry, I would describe Constantine I game is few simple short words- an action-adventure fun game with a mysterious background storyline and amazing graphics! And if I have to highlight some bad thing about the game, then it would be the constant need of using actually money to buy equipments to enjoy the game to the fullest.

Constantine I is set in a mythical background with hell, legends as well as fashion. You have some amazingly interesting weapons (Steel Blade, Shadowless sword, Demon Hammer and a powerful bow) and a lot of demons to test the lethality of your weapons on.

The storyline of Constantine I is set into remote ages when the Demon god was causing a lot of destruction to the human civilization. With the destruction of humans going at a rampant speed, to stop the evil, a hero was born who uses all his powers and cool weapons to send the Demon god in the fiery depths of hell. The powers of the demon god are given away for the future heroes under a pact that they won't harm any human. At this moment, exorcists are born having solid white hair because they are blessed with the devil's powers. Till the exorcists remain alive the demon god won't return and their existence is the need of human beings. They take care of humans by fighting the demons and monsters for thousand of years.
Coming to the game present story, while fighting the monsters, the monsters use their power to demonize a human. Arthur ends up killing the human. Now, according to the pact the exorcist will lose their power and no one will be able to protect the humans. Now, it is up to the last exorcist named Arthur, to destroy the last power of the demon god before he rises again and makes sure that the demons would now never return to the human world. 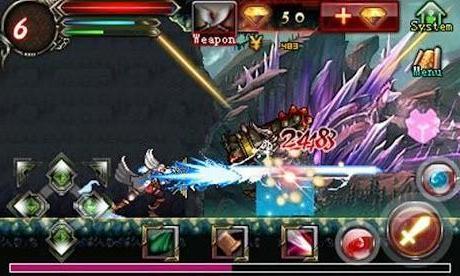 It is better to read the storyline here rather than in the app because whoever has done the translation probably is not a regular with English. There are too many spelling errors and you might end up laughing rather than being awed while reading the storyline!

Controls of Contantine I Android game

All of the controls are one the screen. The attacks are made directly by using the attack weapon button. The movement controls are on-screen as are the 4 weapons to select. You will be able to attack only after selecting the weapon. The selected weapon is continuously shown along with the life. Be sure to save your game as you go on collecting the gems, gifts and any purchases as there is no auto save function in Constantine I Android game. The gems (diamonds) you go on collecting in the game will help you upgrade your weapons along the game. With a lot of upgrades available it is always exciting to wait for the next weapon upgrade. The game level will show in the upper left corner in a circle alongside the energy bars.

The translation problem is a minor glitch and might be corrected in future. Otherwise, the game is good, simple yet fun and exciting. No complex gameplay or controls, making it a perfect game for novices as well as for regulars. For starter's you will be attracted by the storyline and then the gameplay is enough to keep you hooked to the 40 hours of gameplay with different endings and the mysterious storyline.

The only challenge in the game is to get near the enemy and consecutively attack with the weapon while the enemy itself is firing its weapons like the fire blow.

In addition to this all, the unique Map Lightening System and Teleported System will add the tinge to the game.

A few irritants to my otherwise enjoyable experience of Constantine I game were the far too constant pop up ads and feel that you cannot enjoy the complete game unless you spend some real money. The controls did not feel perfect but that might vary according to your smartphone or tablet hardware.

All in all, except for a few minor setbacks, my experience reviewing Constantine I game was fun. A must play game for all Android gamers and on other platforms too if it reaches there.

Everyone enjoys playing games on Facebook. There are thousands of games available on various genres such as action, stimulation, adventure, sports, strategy, etc. But all of them aren't that interesting and fun to play. So here we have picked the top 10 best and most popular games to play on Facebook in 2013 and have made a list of them making it easier for game lovers to choose the games they like with ease.

Read the review of the iPhone and iPad game Virtual Villagers Origin and know the pros and cons of the game. Read what all is interesting in this game and the tips and tricks to play Virtual Villages Origin on your iOS devices. Read all about this game in this article

Hello! I was wondering if there‘s a companion book or a manual for the game „Constantine“ (Android game)??
Thanks for your help!
Sabrina