In this article, I will explain how to upgrade from Windows 8 Consumer Preview to Windows 8 Release Preview.

If you haven't downloaded the installer yet, it is time to download Windows 8 Release Preview from Microsoft official Windows 8 website. I recommend you download and use the .ISO image instead of the Windows 8 setup program since the .ISO image will give you the flexibility to burn in to a DVD and install on a variety of locations like virtual machines and other computers.

To upgrade Windows 8 CP to Windows 8 RP, login to your Windows 8 Consumer Preview system. Make sure you have inserted the Windows 8 DVD or mounted your .ISO image.

Start the setup program to start the Windows 8 RP upgrade. Skip through the welcome screens.

In the next screen, you will be prompted to choose what to keep. Unfortunately, the upgrade from Windows 8 Consumer Preview to Windows 8 Release Preview gives only a single option: "Nothing"

This means, when you upgrade your computer from Windows 8 Consumer Preview to Release Preview, you cannot keep your files, apps and programs. According to the warning, Windows will wipe out everything and give you a clean install. (From my own experience, I learnt this warning is not true. After upgrade, your files are moved to a new location called Windows.old, which can be recovered from there. Read below to learn more about how to recover your files from Windows.old folder).

Before you proceed, remember to backup your data and files. Copy them to a DVD or other backup locations outside your computer to make sure do not lose them. 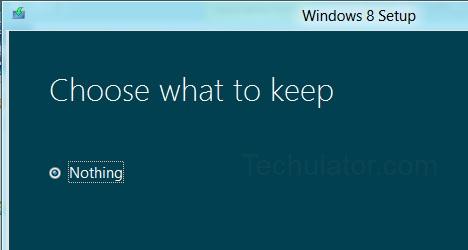 In the next screen, you will be presented with a summary of what you chose. In this case, since you chose the only option of nothing to keep, the summary will show accordingly.

Click the button to proceed and the upgrade will start. During the upgrade from Windows 8 CP to Windows 8 RP, the computer will restart multiple times. The upgrade may take about 5 minutes, depending on various parameters like your computer speed and other available resources.

Even though you were told that you can keep "Nothing" while upgrading from Windows 8 Consumer Preview to Windows 8 Release Preview, Windows has done a nice job of keeping some of your files safe in a folder.

After finishing the installation, you will see a screen that saying "Moving your Settings". This may take a while to complete. 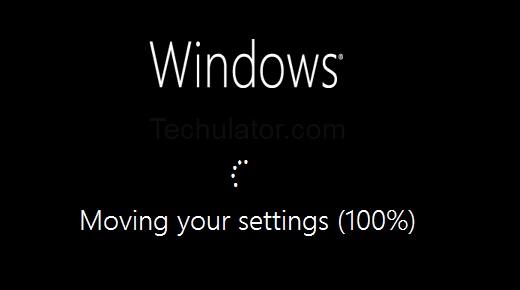 After moving all settings, you will be prompted to personalize your Windows 8 Release Preview. You can choose a color scheme through a screen shown below. Also, you need to choose a name for your computer at this screen. I have selected the name "Techulator" for the computer, which you can see in the below screen. 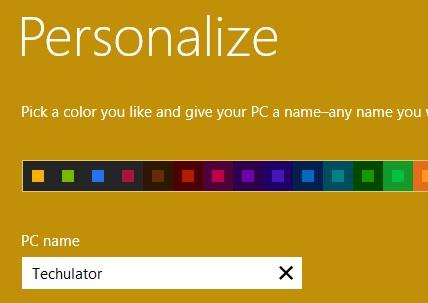 You may choose the express settings and choose various other settings in the next few steps. Also, in another step, you will be prompted to enter a Microsoft account to login to your Windows 8. You may optionally create a local account instead of a Microsoft account, however, if you choose local account, some of the features like accessing App Store may not work correctly.

What happens to the files after upgrading Windows 8 CP to Windows 8 RP?

During upgrade, it is displayed that "Nothing" will be kept. However, I found the following was happening:

2. All system folders from old Windows 8 CP was moved under this new folder. The moved folders include Windows, Program Files, Users, and PerfLogs. Also, all custom files and folders from the "Users" folder was also moved to the corresponding locations under Windows.old folder.

3. Any personal folders in C: drive were retained as it is along with the files under it.

See the screenshot below: 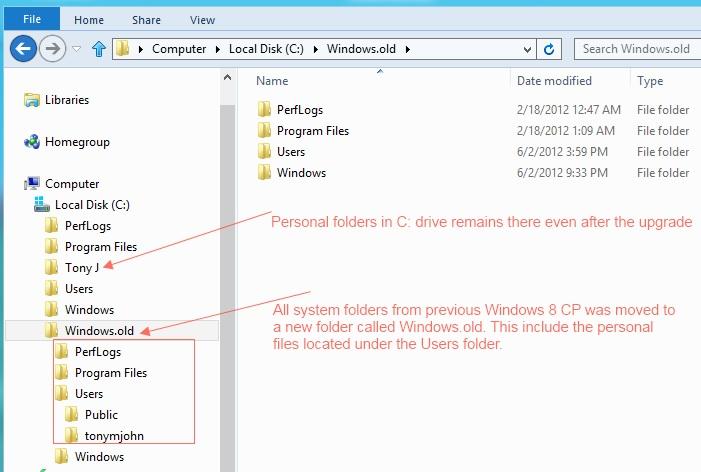 Even though all the files and folders were moved, your Apps and Programs will not continue to work since they are not registered with Windows anymore. You may recover the program files from the Windows.old folder and move to the appropriate locations and try to run the executable files. Some of the programs will need to be re installed while some others may continue to work just by starting the .EXE.

How to install Windows 8 Release Preview on Oracle VM VirtualBox

Is Windows 8 Release Preview ready for everyone to try?

How to give feedback or report bugs in Windows 8 Release Preview?