You cannot proceed with the installation without entering a valid < a href="/articles/Windows-8.aspx">Windows 8 product key. 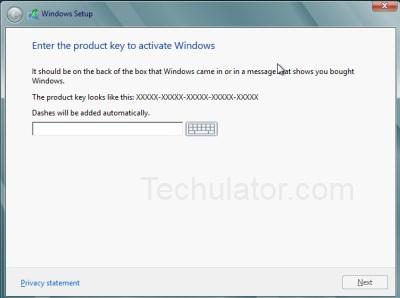 Here is the Windows 8 Release Preview Serial Keys published and shared by Microsoft:

If you like to enable Windows 8 with Media Center, you may use the following product key:

This Windows 8 Release Preview Product key is publicly posted and shared by Microsoft to use with your Windows 8 installation. We do not promote or support software privacy. These serial keys can be used only with the Windows 8 preview versions and cannot be used as License Keys with final release of Windows 8.

How to install Windows 8 Release Preview on Oracle VM VirtualBox

Is Windows 8 Release Preview ready for everyone to try?

How to give feedback or report bugs in Windows 8 Release Preview?

Hey dude the release preview product key didn't work what should I do???

The release preview product keys didn't work, what should i do??

The release preview product keys didn't work, what should I do?

Friend Windows media center key is not working. But you can use the first key to run the Windows 8. i.e TK8TP. But it'll be only a release preview. You can't activate the Windows 8.

PLEASE post to windows8 product key on my e-mail id

I want Window 8 Release Preview serial key to active my Windows 8, please help me to find it.

Microsoft Product keys are sensitive case, because Microsoft provides it for only one system at a time. I wanted to get the Windows 7 key for my laptop. So I contacted Microsoft but they denied to give me a key, so I searched all over the world to purchase it.

Recently, I ordered Windows 7 license from a site from India. They provided me 3 Windows 7 pro key sticker and 2 Windows 8.1 pro keys, which are legal and working good. I'm happy after getting so cheap license keys.

You can also get an unused Windows 7 (any version) 8, 8.1 pro License key from: ODosta Store.

I want to buy another, but now please tell me, If can I use my Windows 8.1 professional product key at my existing Windows 8.1 standard KMS Activated License.

Thanks a lot, you really saved me! I had a bootable disk without key and I needed to repair my OS urgently, hence it helped me a lot.

Hey bro, product key for release preview didn't work. What should I do?

Wow am grateful for the help, the key worked for me