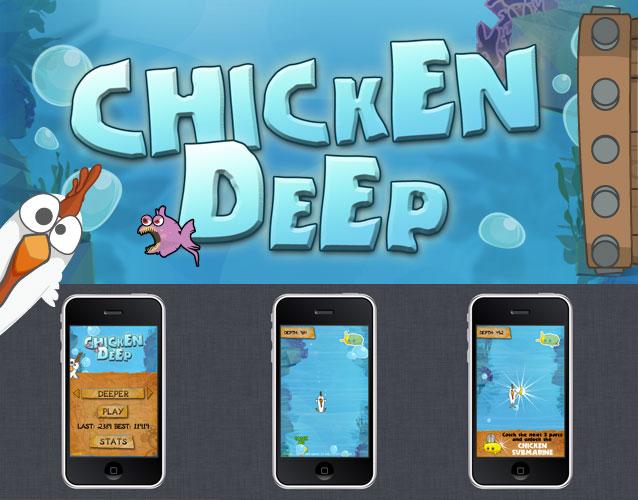 Pros and cons of Chicken Deep game
Pros- It is an intriguing game that provides you core fun.
Cons- No enough information is currently available.

Chicken Deep game is a brainchild of developers Casual Box; a French studio specialized in design and production of games for PC, Mac and Mobile. In 2010 casual box produced an enigmatic and adventurous game, collectively titled as Age of Enigma. In 2012, casual box is set to release another strikingly adventure game known by the name of Chicken Deep. The studio is directed by David Mekersa, manager of worldwide projects.

It is a mystifying game set in the backdrop of under sea water. The under water exploration helps you to explore how deep in an ocean you can propel the chicken.


What the game Chicken Deep is all about

The game is set to release in later this June. The gameplay can be described as Doodle Jump; players control the full crazy chicken.
Pricing

The game will be free for just one 1 playable chicken. Then, you need to pay $0.99 to unlock the game (that includes 3 chickens each with different game play).

The gameplay is all about beating the deep record with heavy and strong chicken. These chickens can hold their breath for 90 seconds and they use bubbles to accelerate. Here are some unique features of the game:


As said earlier, you will get one chicken for free, but three chickens will not be available on a free of cost bases. Blitz Chicken won't require bubbles for buoyancy, but can travel for a limited period of time. The second category of chicken known as Skuba Chicken is faster than its counterpart, but it constantly requires oxygen bubbles. The last one is, challenge chicken it is powered by missions and you will get score multipliers in return.

So, the question remains how deep you can dive your chicken? That's what the game is all about.
As your chicken takes plunge deep down in the sea you will observe the things like
• Salvage Submarine Pieces
• You can dart the dangerous sea creatures
• Also, you can view your scores
• Wear a Bikini
• It won't cover much about the ten-foot pole power up, but it is actually a game power-up

The game is truly a high definition package that provides entertainment and fun, on the first go. Chickens are waiting for your visit. If you have an iphone stay tuned, as the game is about to be submitted to app store.

When is Chicken Depp game set to release

The game provides you incredibly cool graphics and sounds are also perfect. A healthy playing of video games does stimulate your brain and provides you a handful of goodness.

Read the review of one of the most amazing iOS game from the trivia category. Know about the amazing game Trivi.al, know the features of this game and go through its gameplay if you are a fan of trivia games.