We live in a world where the technology has reached heights of success with the advent of innovations; which ten years back people could have not even imagined. With micro being too large for the world and having all the potential to transform their ideas into reality. One big name for transformation of dream to reality is Intel. Intel has created milestones with the advent of Intel processor chips. Scaling its success graph here is another product to its wing. XOLO X900 is the first mobile phone powered with the Intel processor. The cutting edge technology of Intel will surly create waves in the in the mobile world technology. It's being promoted by the Lava – an Indian company which produces handset.

XOLO X 900 is all set to set standards for performance and speed, embedding features which are not just mind blowing but making the best use of the latest technology Intel processor to get the right speed for myriad applications. Its 1.6 GHz Intel Atom processor with hyper threading technology is its main highlight. The processor is the platform for platform to various applications and graphics. It comes with high speed 400 MHz graphics engine which has given the graphics world a new dimension. 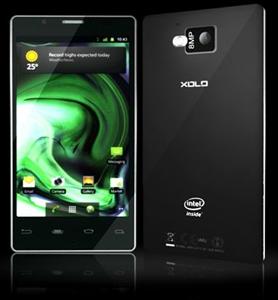 A sleek 123 X 63 X 10.99 mm body weighing about 127 g is what defines the hardware of XOLO X 900.The design is inclusive of various slot options like micro Sim Card slot, micro USB slot, micro HDMI slot and 3.5 mm audio jack. The body has some keys for volume and power.

XOLO X 900 boasts of Android 2.3 gingerbread technology. Further, the operating system has been even upgraded to ICS (Ice-Cream Sandwich) technology which is yet another of its achievement.

Lava's XOLO X900 has 4.03 inches with 1024 X 600 resolutions. Finely protected in Corning Gorilla casing and imbibing the latest TFT LCD Capacitive touch and 1080p high definition together makes XOLO X 900. Its front camera is of 1.3 megapixels and rear camera is an 8 megapixel camera with photo burst mode which enables to take about ten pictures in less than a second in just a single click. So easily capture and treasure every moment of your life with XOLO X 900.

XOLO X900 has a long durability when its battery life is considered. For playback music with earphones the standby time is about 45 hours. Browsing has a standby time of up to five hours. The video has a back up of about six hours. The total standby time for XOLO X 900 is about 14 days. That's just amazing achieving a milestone in field of mobile technology.

XOLO X 900 has many more features in addition to the ones mentioned above. It has the following Video supporters Android Video Player and Double twist. With 16 GB internal memory and 1 GB RAM and power packed with various audio and video codec XOLO X 900 surely stands out.

The price of XOLO X900 starts at around Rs 20,720 only. Keeping in mind its various features and the speed it promises is worth for the money.

Are you thinking of buying a smartphone with excellent features at an affordable price of around Rs.13,500? Your wait for this type of smartphone is over. Lava International made its new smartphone Lava Iris 504Q available for sale at a pre-booking price of Rs.13,499 on several online stores like Flipkart, Snapdeal, Infibeam, Tradus, Saholic and Indiatimesshopping. Read this article for review, features, specifications, price and availability in India of Lava Iris 504Q.