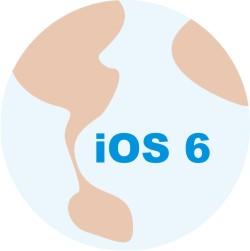 The upcoming most awaited new iPhone 5 smartphone is predicted to encompass iOS 6 operating system. Such embedded revolutionary features in new iPhone recognizing it as the next-gen smartphone. Speculations and rumors enforce new iPhone to embed a number of smart features, including Siri programme, improved multitasking, Face recognition, Facebook integration and above all Apple's updated – iOS6 operating system. So, let us drill down little deep in to expert's anticipations from iOS 6 software updates:

The iOS 6 is expected to provide advanced multitasking options. The operating system shall provide facility not only to view contents from two adjacent windows, simultaneously but also to monitor in real-time data bandwidth usage.

It is also expected that iOS 6 will promote multi-app usage too. For instance, Instead of switching between windows, you will be able to do both i.e., working on email while reading a pdf file or any webpage. For the first time, the multitasking feature was debuted with the iOS 4 in year 2004.

In order to make the interface more compact and user friendly, the iOS platform had already integrated Twitter onboard and now it is going to integrate Facebook also to provide fun for social networking that will allow users to tag friends, share photos and manage their albums in Photos app. Additionally, syncing or integrating photos and contacts between platforms like Facebook and Twitter will be a certain relief for people from the hassle of manual update methods.

iOS 6 is expected to embed face recognition feature in new iPhone 5. This application will be able to identify users based on their unique facial characteristics to implement its lock screen pass code for security purpose. This could also be very useful for tagging photos, or adding name captions to videos.

Considering the popularity of Siri programme for iPhone 4S enhances the expectation for support of more advance Siri on iOS 6 based new iPhone 5 also. Siri is one of the most interesting features that work as a Voice-activated personal assistant. It is speculated that in future, maximum devices will be facilitated with more in-depth integration of Siri in the iOS 6.

In present scenario, GPS (Global Positioning System) is considered to be the most essential feature for any smartphone. An advance turn-by-turn voice assisted navigation system (with maps) using GPS and directions for multiple routes also predicted to be integrated in iOS 6 software.

The new looking revamped design with a fresh look feature of iOS 6 will definitely be welcomed by the users.

As we know, for now the lock screen feature restricts the users to general control of the iOS device. It is expected that iOS 6 would be facilitated with more enhanced Lock screen. For instance, users would be able to access apps like clock, calendar and many other utility apps without having to unlock the screen every time using password.

Providing easier way to clear notifications is also one of the most anticipated features from iOS6. Instead of traditional double tapping the "X" icon on right side of notifications to clear alerts, the user can be allowed to swipe from left to right across the screen to clear single notifications and shake the phone to clear all in one shot.

For the speculated 4 inches large display screen of upcoming new iPhone 5, instead of 4 finger slide-up gestures, a three-finger swipe up gesture can be anticipated from iOS 6 for easy accessing multitasking bar and more. As for now, the smaller screen display makes the gestures difficult for users.

Read the review of Flights!, Apple iOS game and also learn tips to play the game.

Apple releasing its new iOS6 version in September. Read this article to learn more about the exciting features of iOS6.