Recently there are 40 versions of Quick Response (QR) codes are available. And each version of the symbol has a different configuration. As the version increase from 1 to 40, data contained in it increases as version increases. Version 1 is 21 by 21 matrixes as version increases 4 modules increases from the previous one. A module is nothing but black and white dots that make up code while the configuration of the module is a number of the module contained in a symbol. Each version has its coding capacity with respect to the storage of data in various ways. QR codes have many advantages like quick reading, higher storage capacity, and error corrections.

What Quick Response (QR) code made up of?

Quick Response (QR) code is made up of finder pattern, timing pattern, alignment pattern, format information, coded data and the Quite Zone, which are key components/elements of a Quick Response code.

Each component has its own role. The function of each element is as under:
Finder pattern is a block with a central black square, with white and black alternate Square outside of it (concentric squares of alternate colors). There are such three blocks available in each corner except bottom right. This finder pattern tells the scanner/reader that image which is being decoded/scanned is QR code. Finder pattern does not contain any data. 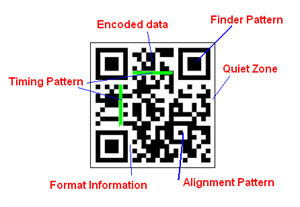 Orientation pattern which also does not contain any data but it tells the scanner the address for correcting the distortion of the QR code. The central coordinate of the alignment pattern is identified of the symbol and to detect it easily, a black isolated cell is placed in it.

Timing pattern or timelines which does not contain any useful data. The function of the timing pattern is to identify the central coordinate of each cell in the QR code and timing pattern is placed between two finder patterns.
Format information is positioning symbol and which enables the scanner to decode/scan the code at any orientation with high speed.

Encoded data is the main data which are required to be decoded by the scanner to retrieve the information contained in it. The QR code is encoded into binary language. The white border area outside the code is called the Quite Zone which separates the QR code from other labels on the product or any stuff nearer to it.

Modern technology always replaces old ones. It is right said that QR codes now replaces 1 D barcode to have more advantage of higher and faster data handling, more storage, quick response, ease of scanning at any orientation and error corrections. Many applications areas where QR codes are used for: