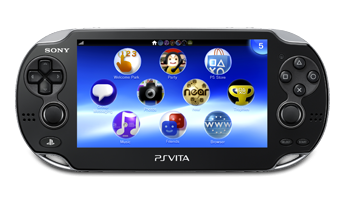 General
PS Vita comes aptly armed with two analog thumb sticks which are specially designed for gaming purpose, a 4GB memory card, a fantastic 5-inch OLED multi-touch capacitive touchscreen with a resolution of 960x544 pixels which almost resembles the look of PS3 graphics. Like other PSPs, PS Vita also features a D-Pad, PSP standard buttons such as PS button, start and select buttons, action buttons and so on.
Unlike other PSPs, PS Vita can support Bluetooth, WiFi and 3G and also rocks with dual VGA cameras without flash, built in stereo speakers and a built in microphone.

PS Vita | Memory
PS Vita has a memory of 512 MB RAM and 128 MB for A9's defacto GPU. Apart from PSPs the drawback of Vita is that, it has got no internal storage. So inorder to fill that gap, consumers are provided with Vita memory cards which is similar in shape but smaller than that of SD cards. Near by the slot of memory card, there is another slot that holds game cartridge to use it as UMDs as Vita is not compatible for UMDs.

Dual versions of PS Vita
PS Vita is Available in two versions; WiFi only and WiFi/3g supported. Although they are two different versions, they does not look different in its specifications. WiFi/3G version also features GPS unlike WiFI only Supported Vita. Rates slightly differentiate for both the versions.Currently Vita holds a price of Rs.20000 for WiFi+3G model and Rs15000 for WiFi only model. Both the versions measures a height of 0.73 inches, a length of 7.16 inches and a width of 3.29 inches. But the weight for both slightly changes, when WiFi only model holds 260g, WiFi/3G holds 279g.

PS Vita has got a marvelous and intuitively designed Operating System. It is easy to use and navigate through as it is extremely responsive and quick and contains smooth animation. PS Vita OS supports to change background colors, move apps around and much more amazing customization.
Vita has also got a fast browser, although it resembles that of PSPs. Another fact that makes Vita unique from PSPs is that, PS Vita allows to pause a game and can browse through other apps by just peeling off the previous game/app screen from top right corner.

The new impressive look for PS Vita had given a crazy mind for the consumers, at the same time it does not look too different from its predecessors. PS Vita has a beautiful curvy oval shape and measures 7.2 inches including screen, which is comparatively larger than PSP 3000`s and with a height of 3.3 inches and weights 260g. PS Vita gives a resolution of 960x544 with color depth upto 16 million colors. Vita also is too forward in the field of pixel density having 220ppi, which is plenty enough to run high resonating graphics game. There is also smooth multi touchpad on the rear side, which makes Vita unique. This rear touchpad is mostly used to control games. PS Vita also features six axis motion sensing technology, which will give the consumers a 3D feel while playing.

PS Vita is the most marvelous gaming console ever manufactured. In short PS Vita had impressed lot of PSP fans. PS Vita also had snatched the attention of non game lovers. Sony had released PS Vita by solving all the limitations present in PSP.

This article deals with the interesting technique for all the PS3 users on how to connect your personal computer or laptop to your PS3 and also learn how to transfer PC files to PS3.