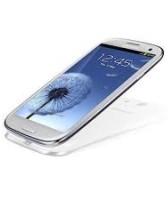 After the last year's bestseller Samsung Galaxy S2 which was one of the most successful smartphone in terms of sales and reputation, the Korean mobile manufacturing titan Samsung has just released its most awaited gadgets for year 2012 - Samsung Galaxy S3. The Smartphone owns many innovative new features to beat its rivals. It includes 4.8 inches large hd display screen, 8MP Camera and runs on 1.4 GHz dual core processor. Soon, the smartphone will be available in two attractive colors i.e., Pebble blue and marble white.

Storage and battery details: The smartphone owns up to 32gb (+64gb with card) of internal storage and 1 GB RAM including a 2100mAh standard battery (wireless charging option extra).

Connectivity: Samsung Galaxy S 3 would come equipped with both NFC and LTE connectivity.

For data connectivity the handset includes Bluetooth v4.0 with A2DP and EDR and micro USB v2.0 and USB on the go feature. The phone also supports GPS connectivity with A-GPS features.

Price: Though the price of Samsung Galaxy S3 has not been public yet it is expected around £40 per month on a two year contract.

Other important features and reviews:


The Smartphone has slender designed look with latest features and weights to 133 grams with dimension 136 x 70 x 8.5mm. Besides this, a number of additional new features provided to this hand set, specified as below:

• Smart Stay
The phone tracks your eyes, so as long as you're looking at it, the display won't dim or turn off.

• Direct Call facility
If you have got a contact on your screen, you do not need to hit call; simply hold the device up to your face and the number will be dialed automatically.

• Smart Alert facility
The enhanced notifications centre of Samsung will tells you what's happened since you last looked at your phone in order of importance.

• Burst shot and best photo
8MP camera of Samsung Galaxy S3 smartphone offers a 20-shot burst mode for users and it will choose itself the best photo for you. Besides this, photography is also possible now along with filming the video.

• Face Zoom facility and Slide Show
In addition, double tap a face to zoom in; the automatic slide show generation zooms in on faces as individual pictures, for pictures with lots of people.

• Social network and camera integration
Buddy Photo Share, or display social media profile information on screen is the automatic tagging of pictures and the option to send images directly to those identified in them. The Group Tag lets you tag multiple people in one go, in case you set up a group first.

• S-Voice feature
The S-Voice feature allows user to control his phone through voice. For instance - To turn up and down the volume and to ask some questions to smartphone. Here the S stands for Samsung, not Siri.

• S-Beam
This is the high speed file transfer between two phones touched together via NFC and Wi-Fi Direct, operating at up to 300Mbps.

• Pop Up Play feature
Playing video in a window on any home screen.

• All Share Play and Cast
This feature is provided for using your screen as a remote control, or to share your S3's screen to a TV.

Galaxy S2 was the last year's successful launch of Samsung that got the honor of 20million unit sale. Samsung again hopes with Galaxy S3 to replicate the success of its predecessor. It is expected that the Samsung Galaxy S3 is the Android phone that is best-placed to take on Apple's iPhone and Samsung believes that this device will cement its reputation as an innovator in prevailing top gadgets market.

One of my friend has this smartphone . It is very good to use and its all features are good.

Yes, I am also looking forward to buy this Android phone. Any idea when will the Samsung Galaxy S3 launch in India?