Recently Samsung has launched new series in the Indian market is known as Galaxy series mobile phones This series include Samsung Galaxy Y S5360, Galaxy Ace S5830, Galaxy Note N-7000, Galaxy S 2 I9100, Galaxy Pocket S5300 and many more. Here i have taken only five of them those phone very popular in the market with vide range in price. All phones loaded with latest operating system with high speed processor with latest features. This article can be used for comparing this phone for your requirement if want to purchase or suggest your friends. This article contains all specification and key features of the all above given model with their price.

This phone is loaded with Android v2.3 (Gingerbread) operating system and 832 MHz processor. This phone is touchscreen type having a large TFT screen with a resolution of 320 x 240 pixels. The phone comes with a 2 megapixel camera which supports smile detection. It is loaded with all type of sensors like an accelerometer and proximity sensor to enhance your experience. A 1200 mAh battery which gives you a talk time of up to 6 hours on 2G and up to 6 hours on 3G. The Galaxy Y has an internal memory of 160 MB and is expandable up to 32 GB using micro SD, micro SDHC cards. The phone suuports GPRS, EDGE, 3G and Wi-Fi platforms to connect to the Internet. You can connect to other devices through Bluetooth and a USB port and share files. The phone has unique facility like Find my phone which helps you when you lost your phone. Price of the phone is Rs. 7210. 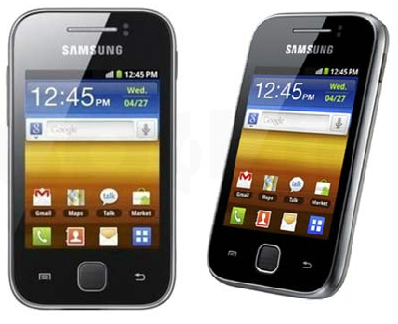 The Samsung Galaxy Ace is an Android v2.3( Gingerbread) smartphone with large 3.5 inch capacitive touchscreen. The phone is loaded with high speed 800 MHz ARM11 processor with an additional Adreno 200 GPU for handling graphic intensive apps. The phone has 5 MP camera with LED Flash and a 2x Digital Zoom capable lens. All types of sensor like accelerometer for UI auto-rotate and a proximity sensor for auto-turn off is included inside the phone. The phone is powered by a 1350 mAh battery works for 11 hrs on 2G and 6.5 hrs on 3G networks. The Galaxy Ace comes with 158 MB of internal memory which can be expanded up to 32 GB via micro SD card. The Samsung Ace S5830 supports 3G HSDPA connectivity at 7.2 mbps, WiFi, USB and Kies PC Sync for data transfer. The phone supports A-GPS navigation, Digital Compass and location based services with access to Google applications like Google Maps. Price of Samsung Galaxy Ace S5830 is Rs. 12750. 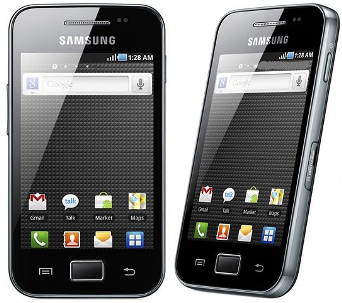 The Samsung galaxy note is powered by Android v2.3 (Gingerbread) operating system with latest 1.4 GHz Dual Core ARM Cortex A9 Processor. The phone has a large 5.3 inch Touchscreen that helps you view pictures, videos, files and more with crystal clear clarity which also supports S Pen stylus allows you to make a sketch or notes. Phone is loaded with a powerful 8 megapixel camera with an LED flash and high quality video recording is possible using this camera and phone is also loaded with secondary 2 megapixel camera on the front which is used for video calling. The Samsung Galaxy Note has an internal memory of 16 GB and can be expanded up to 32 GB using micro SD, micro SDHC cards. GPRS, EDGE, 3G and WiFi this features are loaded on this mobile phone can be used to connect to the Internet. This phone is mostly used by business person because of this features Pushmail along with Document Viewer, Document Editor, Adobe Flash 10.1 and Mobile Printing. The phone Price is Rs. 31950. 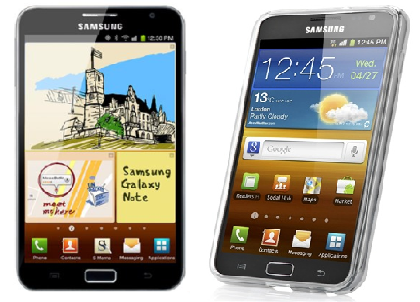 The Galaxy S2 is loaded with latest Android 2.3(Gingerbread) OS and high speed 1.2 GHz ARM Cortex A9 Dual core processor. The phone has 8 megapixel camera which supports full HD video recording at 1080p resolution and LED flash. There is also a secondary 2 megapixel camera for making video calls. All type of sensors are available like accelerometer, proximity and light sensors, magnetic and gyroscope sensors that detect dynamic hand and arm movement to deliver an enhanced gaming experience. The phone has 1650 mAh battery work up to 18 hrs minutes on 2G and up to 8 hrs on 3G networks. The Galaxy S2 I9100 comes with 16 GB internal memory and supports up to 32 GB microSD cards. The S2 19100 supports 3G, GPRS , EDGE and Wi-Fi connectivity. The mobile supports high speed Bluetooth v 3.0 connectivity for media sharing and comes with a micro USB port for sync with computers and recharge. The Galaxy S2 features an intuitive Voice Command feature that allows hands free execution of all major functions like calls, texting, launching apps and music control with the ease of a voice command. Price of Samsung Galaxy S2 I9100 is Rs.26800. 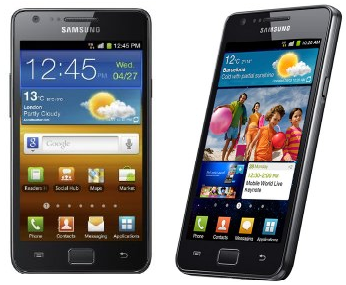 The Galaxy Pocket is loaded with latest Android 2.3(Gingerbread) OS and 832 MHz ARM 11 Processor. The phone has 2.8 inch Capacitive Touchscreen TFT display with resolution 240 x 320 Pixels. Only single camera is available in the phone with 2 megapixels allow you to recording video up to 15 fps. All type of sensors are available like accelerometer, proximity and light sensors, magnetic and gyroscope. The phone has 1200 mAh battery work up to 10 hrs on 2G and up to 7 hrs on 3G networks. The phone comes with 3GB of internal memory and supports up to 32 GB micro SD cards. The phone supports 3G (3.6 Mbps HSUPA), GPRS, EDGE and Wi-Fi (802.11) connectivity. A 3.5 audio jack supports all type of headphones. Additional features are available like Calendar, Wi-Fi Direct, Predictive Text Input and Voice Input which help you for office purpose. The phone is loaded with A-GPS with Google Maps used for finding track during driving as well as when you lost your phone. Price of this model is Rs. 7175. 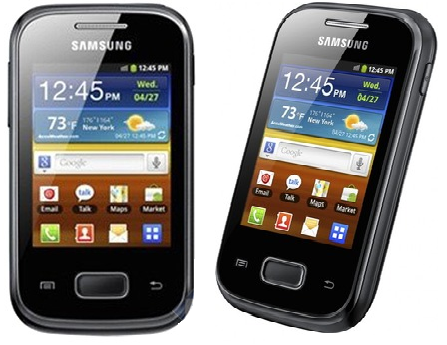