Google Penguin update is the most recent, major search engine algorithm update from Google to reward high quality websites. This major search engine algorithm update was rolled on from April 24, 2012 but no official word is given on when this will be rolled out in each country or whether it will be rolled out everywhere at the same time. Also, it is interesting to note that Google does not name it "Penguin update" in the official blog, but the name is mentioned only in the complaint form.

According to the official definition of the Penguin update given at the Google Webmaster Central blog, this update is meant to "reduce webspam and promote high quality content". So, typically, after this update, we should see more high quality sites in the Google search results and spammy sites should go away or should be pushed down to the bottom of the search results.

Let us get back to the discussion on How to recover from Google Penguin update.

How to recover from Google Penguin update

Looks like the Penguin update was not welcomed by the web community in the way Google expected. Due to the large number of complaints that genuine and original content was penalized by the Penguin algorithm update, Google has decided to open a complaint form to accept complaints from webmasters and bloggers.

If your website or blog is affected by the Penguin update and your original content is impacted by this algorithm change, you may report it to Google. Here is the complaint form to report to Google:

Here is how the feedback form looks: 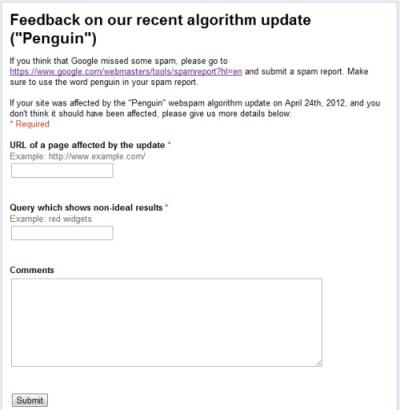 If you think your website should not have been affected by Penguin algorithm update rolled out on April 24th, just fill out the form with all details and evidence to prove your point. Specify your URL, the search query for which you expected your website to show up and the details.

You may use the same feedback form to give any general feedback related to the Penguin update. It does not have to be a complaint related to traffic reduction but you may even use it to report a good feedback like significant improvement in your traffic after the algorithm change.

There is no guarantee that Google will respond to you. Even if Google wouldn't analyse each case one by one, I am sure it will look in to the complaints and analyse their algorithm again based on the general feedbacks. Present your case well with good description in good English to get better attention. Nobody will bother to pay attention if you have not given all required details to study your case well.

I have just filed a complaint using the same form and reported that our website has lost traffic to original content pages as part of the Penguin update. Here is the confirmation after submitting the complaint: 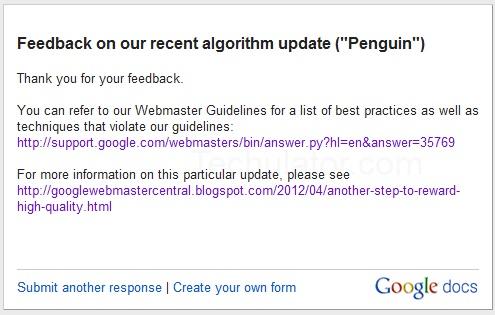 My site is a high quality, authority site, but is affected by Google algorithm changes

In the last few days, Google has rolled out many algorithm changes that affected hundreds or thousands of websites. If you look at the comments posted under the official Google Webmaster Central blogs, you can feel the heat of it. In fact, this site itself (Techulator.com) was also affected by some algorithm changes. Since April 7th this month, we have lost a very significant portion of our traffic. I am not sure which algorithm change was the cause of it. Since the Penguin update was announced only April 24th, 2012 and it may take a few days to see the real impact of it, I don't think our case is exactly the same. What I suspect in our case is, there were a large number of our articles reproduced by other bloggers and websites. We had to change our domain name from MyWindowsClub.com to Techulator.com in March 2012. Even though we had setup all redirects correctly according to the guidelines from Google to move content to new domain, Google failed to transfer the content authority our old domain had. So, Google considered our new site as copy cat and started ignoring us in the search results. All copy cats are now appearing in search results, reaping the fruits of my several years hard work. I am dealing with that issue now through DMCA notices and various other means, which I will share through another article soon.

How to recover from Google Penguin update penalty?

Is your website penalised by Google Penguin updates and your website lost traffic? Are you looking for ways to recover from the Penguin penalties and get back the original traffic in Google search results? Read this article to find some tips on recovering from Google search penalties.

Google Panda and Google Penguin have created havoc in many a webmasters and bloggers lives. For those affected by Google's algorithm here are some smart tricks that can help get back traffic that was lost.

Recently, Google launched a new ranking algorithm update called "Penguin". A number of websites were reported to have got affected by this update resulting in loss of organic traffic and thus suffered badly. The webmaster forums are now filled up with the thread related to this issue and everyone is complaining about the limitation of this update.In this post, I will provide useful tips for such bloggers to recover the original traffic for their blogs.

The recent update has punished the websites playing with backlinks and making use of loopholes in ranking algorithm of Google to rank low quality content. But after the Google penguin update the scenario is completely changed. The demand for original and high quality articles or web content has increase. The webmasters also realizing the importance of quality content in the long run. In this post, I will discuss that how the content writers will benefit from the Google penguin update.

A number of websites have lost their search engine rankings after the Google penguin update. While some websites have been penalized for over optimization the major target of this update are the websites that used private blog networks to achieve higher rankings in Google. Even if your website is not affected by the Google penguin update, there are still a number of hidden messages for you in this update. Let us discuss what this update means for you.