Pros and cons of Survival of the Fittest
Pros: Fights for all skill level players are available, unique genre game for a social platform
Cons: Costly power ups cannot be purchased without spending actual cash, nothing on story line


Detailed review of Facebook game Survival of the Fittest

Sometimes some games can be appealing just because of the newness in it. One of the games pertaining to this genre is the latest addition by Izelis, Survival of the Fittest. It is an arcade game in which human characterization or superhuman characterization is not used rather animal characterization is used. So it can prove nostalgic as it will help you remember the good old days when you used to play games like primal rage which was a beast based fighting game. Now let us peek into the insights of the game. 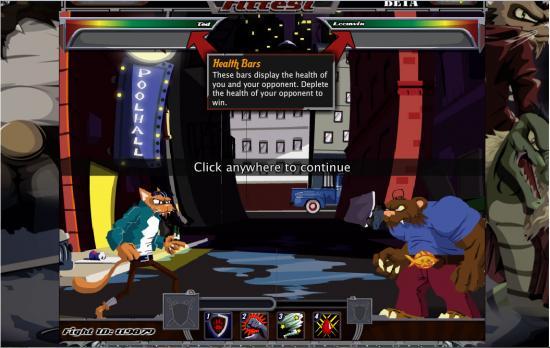 If you look content wise, this game is rather lame. First of all, you are required to select from three animals you are provided with. You would be amazed to know that the three animals provided are cat, dinosaur and bear. But don't be amazed, these three animals are provided as all the three of them have different and unique fighting styles. On one hand you have cat which is the fastest and relentless of all the three making it the best fighter, on the other you have the dinosaur who is the strongest of all the reptiles and can overpower any opponent with ease if used carefully. Now you have the bear which has the absolute defense techniques like digging the claws in. 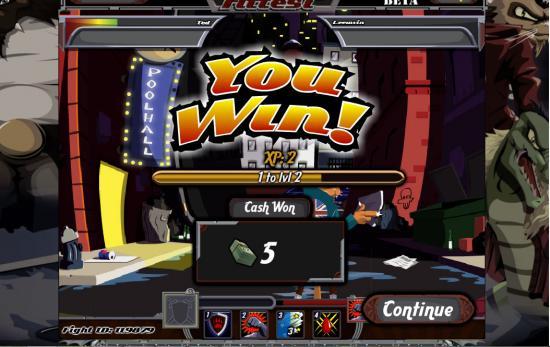 Now, as you have selected your opponent you are ready to go. The fight sequence in Survival of the Fittest places two characters on a one on one fight where rather than the standard controls you are provided with the handful of triggers from which you have to select one. The one selected trigger will enable one of the four skills which you have to use effectively to lower your opponent's health bar or to protect your own. Every attack has a recharge time if you want to launch an attack you are required to wait for some time before it is done. Needless to say, stronger the attack more will be the recharge time. Now once you have won a fight, you would be provided with experience points and some currency so that you can buy some exquisite items. Its better that you buy something as soon as you win some coins as it will help you from loosing your money as if you win one game and loose another then all your money you have achieved by winning would be going in vain.

When you collect experience points, it will allow climb up each level and would add unique talents to your skill set.

So on the whole, Survival of the Fittest is a great game for people who are playing fighting games for the first time but if it is updated more characters, more skill sets and more content then it can prove as a game which anyone would be longing for.