Pros and cons of Rune Raiders game
Pros: Innovative conveyer belt based movement
Cons: Could have used a story line, could have been more graphically interactive
Developers: Retro64 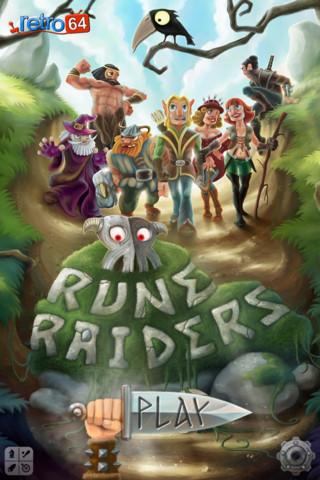 Rune Raiders is a turn based strategy crawler game with all features of the game stripped down to the basic levels of the genre. It is stripped down on every element used to judge a game- graphics, story and music. The characters of the game are nothing more than images of faces moving on grids. Yet, for such a light weight title, there is still something in the game that compels for a deeper look though it might require some explaining about features.

The puzzle interface is on a top down perspective with the base divided into grid. AS you step forward the ground moves back, sort of like you are on a conveyer belt. You character makers move left and right and a little bit up and down but most of the times they are in the bottom third part of the screen and it is the ground that actually moves. 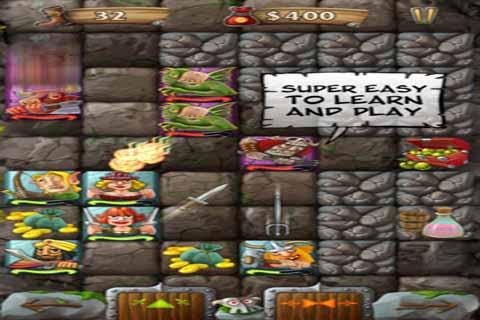 It might feel strange but this set up is actually preferable because you have more of the active screen n front of you. The combat nature of Rune Raiders is quite similar to Dragons and Dungeons with its grid based format, even though it was based on dice and little miniatures but still you get the same feel. All your characters in Rune Raiders have their classes and range for mobility and weapons. For example, you elf's bow has a range of X squares and if you are present in that range then he fires.

The classes are standard fantasy based, with your wizards preferring to stay out of limits and fire launch their magic from far, and the dwarves being short and stout with high defense capability but being slow. These are class characteristics comes into play when you are trying to protect those who needs to be protected and pushing those in the line of fire whom you want to be eliminated.

Rune Raiders world is run by the power of money. You earn cash by killing the bad guys and picking up the treasure. Before the start of each mission you get to spend this money to bring along new characters in the game. When you are done you can start the next level. However, it is better not to spend all your money before the start of new level because during the game too if one of your heroes falls during the fight you need to shell out some money to revive them.

You can go back and try a level any number of times. This means that if you are not able to pass a level you can play it n number of times to finally just grind it out. Play a easy level again and again and you are flush with a lots of cash and up gradations that are sufficient to help you sail through a number of levels without any challenge. It will need your will power to keep the game hard by not repeating levels and actually enjoy the developer's vision, or you can just sail past and boast that you complete the game Rune Raiders in a short time.

To say the truth, I can't really decide whether this game is good or bad. I did not have a bad time with the game but then there is nothing to compare it with. Rune Raiders game is quite weird to play and even though it is a turn based strategy game at the basic level, but the playing interface give a different feel altogether. The light game features very easy to adapt to and once I got the hang of the game I enjoyed playing it. If the game just had a story line attached to it the fun would have been more, still it was fun playing this puzzle based combat game.

Read about the Playstation 3 game Papo & Yo and know what all is in this game.

A detailed review of Ichi - A game for Android, iOS, PC and Mac along with detailed Walkthrough and tips.