Battle of the smartphones

The world turned into a battle arena this October when two cell-phone giants- Nokia and Apple announced the entry of their supreme models in the market-The nokia Lumia 800 and the iPhone 4S. Both these phones boast of some of the latest features and looks that can kill! 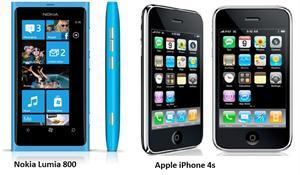 There are various pros and cons of the two models- Apple iPhone 4S and the Nokia Lumia 800. Let us discuss them.

The Nokia Lumia 800 boasts of the latest Windows 7.5 Mango operating system. It has a sleek and curved polycarbonate chassis similar to the Nokia N9 which is light and at the same time very durable.

Apple iPhone 4S on the other hand has the latest iOS5 operating system which Apple claims to be the best and the fastest till date. The iPhone 4S is the same in design and construction with its predecessors and will need a good protective casing for rough uses.

The operating system of Apple Iphone 4S thanks to its dual core processor is super fast and sleek. The Nokia Lumia 800 on the other hand features a single core processor which however is no way slow and is comparably faster than most of the smart phones that we have seen.

iPhone 4S comes with notifications feature on the home screen and imessage and twitter integration. The Nokia Lumia 800 too has got a super cool application- Nokia muzik where you can download your favorite song mp3s and browse through radio music stations.