The Go-Tech, a Delhi based company along with AcrossWorld, a international education company has come up for the development of this ATab Tablet, which is another cheap tablet to be released in India. Both these companies will have signed to work together in manufacturing, developing and launching this ATab Tablet in India. This ATab Tablet was released in the second week of March, 2012 in the market and now it has made the gadgets lovers to have eye over it. This ATab Tablet was released to be a standing competitor for Aakash tablet which is being the talk of the India and also which turned out the whole Tablet market in India. But yet this Aakash tablet had some negative thoughts, now this ATab will overcome that will all its new features and attract people towards it. 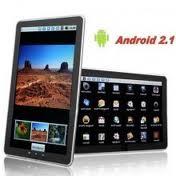 The ATab is an Android Tablet having a 7 inch touchscreen display. The most important to know about this ATab Tablet is, this Tablet comes with free-access to "EducationBridge", the education technology platform for 3 years. The education technology platform provides various educational resources, contents for both the teachers and students through a software called Open Source. Mr. Stephan Thieringer, the president and chief executive of AcrossWorld told that this ATab is for students and it focuses on providing various educational resources for Indian students.

During the launch of this ATab in India, Stephan Thieringer stated that, "With the availability of ATab, Indian schools will be able to discover and leverage world-class educational content at their fingertips. It is very timely and appropriate that India schools and colleges alike seriously explore advanced technology solutions that provide instant access to the world's best educational resources , especially now within an affordable budget". So said by Stephen, we can hope that our Indian standard of education will develop our students grade to international level.

The ATab tablet from AcrossWorld is powered with a 1.1GHz processor with 512 MB RAM. For memory the ATab Tablet has 2GB of internal memory for storage and in accordance to it, you are also provided with 16GB of extendable memory. Added to it some other features supported by the ATab are USB port, Bluetooth and WiFi. As said above, this tablet runs on Android operating system and ships with an unlimited access to education platform from the AcrossWorld Education's proprietary for 3 years for free.

This ATab tablet is getting a good welcome acknowledgement from the students both from schools and colleges and also creating interest among others throughout the country. The AcrossWorld officials told that, "About a dozen schools and colleges from various Indian cities like Delhi, Kanpur, Allahabad, Rourkela and Gaujarala have taken keen interest in the tablet."

Gaurav Khanna, the CEO of Go Tech said that, "By bundling free access to AcrossWorld's global premium educational content, ATab is not just a book shelf, but a whole library full of the world's best Open Source knowledge for schools and higher educational institutes".

Cost of ATab Tablets in India:

The ATab Tablet is priced for Rs. 5,000 only. This is comparatively little costly when compared to the Aakash tablets which was released by the India Government. By this time, the AcrossWorld Education has got more than 5,000 users alone in India. And this likely to increased by the launch of this ATab Tablets. It has been said that AcrossWorld Education will introduce only about 10,000 ATab tablets in the intial stage and later on seeing the demand they will increased rapidly.

Am having a problem of low volume in the ear piece. What should I do?