The new iPad is finally released amid many expectations and rumors. As some tech pundits had predicted- the new iPad comes with a great Retina display, a faster and better A5X processor and a double capacity battery. It however lacked the punch normal iPad products deliver with futuristic looks and technologies which was not to be seen in the latest iPad. Hence comes the question- Is it worth buying the Apple iPad or you should go for any other tablet. Read on the following comparison between the Acer Iconia Tab and Apple iPad to know more about these two tablets.

The Acer Iconia Tab comes with Andriod v3.0 Honeycomb which can be upgraded to v3.2. The Apple on the other hand has an iOS 5.1 operating system. Android has the advantage that it has an Open Android market where one can download more than thousands of applications and games and most of them are available for FREE. However most of these applications do not maintain good quality and may have bugs. Also the Android OS is comparatively slower and drains battery. iOS on the other hand is closed and well moderated. Most of the applications are available for a price but do maintain good quality. Also the iOS is smoother and stable as compared to Android. 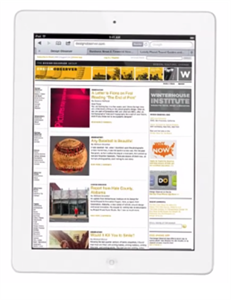 Both the tablets come with the same 1 GHz dual core Cortex A9 chipset. However the Apple iPad comes with the latest Apple A5 processor which is supposedly faster than Tegra 3 and hence is the fastest processor in a mobile device. The Acer Iconia on the other hand has a Nvidia Tegra 2 T20 chipset which is comparatively slower. 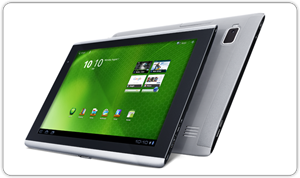 Both the tablets come with a 5 MP camera and have video recording capabilities as well as secondary camera.

Both the tablets are available in Wi-Fi as well as 3G configurations. The new iPad on the other hand comes with both 3G and 4G LTE for your connectivity solutions.

Both the tablets come with basic features like Bluetooth, USB, GPS etc. The Apple however does not support Java and flash.

The Acer Iconia tab comes with a 3260 Li-Po battery whereas the new iPad comes with a 42.3 Wh battery to ensure that your iPad lasts for 10 hours while continuously watching videos or browsing internet on the go.

Both the tablets are priced almost equal although the Acer Iconia tab is priced slightly lower than the iPad. Hence price won't be a major factor while determining which tablet will suit you.