After the almost unnoticed launch of Galaxy Player 4.0 and 5.0, Samsung has come up with an upgraded version of its Galaxy player 4.0 called Samsung Galaxy S Wi Fi Player 4.2. Samsung has recently launched this media player in the on-going Mobile World Congress 2012 in Barcelona.

I am sure you are now very curious to know about the look, design and of course the technical specifications of Samsung Galaxy S Wi Fi Player 4.2. It is a low cost portable media player which is almost like the Samsung Galaxy series handsets with only the calling facility removed from it. 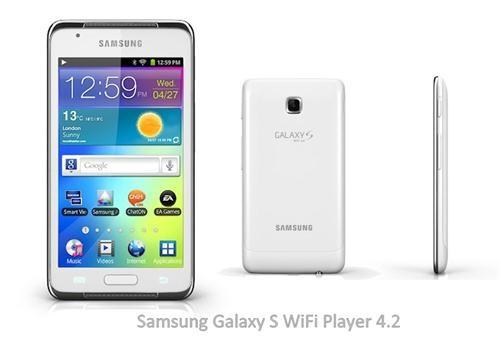 It is a slim and elegant handheld device with a beautifully designed white body with a chromed plastic trim and a plastic back cover in white colour and round corners. The player is provided with two virtual touch sensitive buttons on left and right at the bottom of the screen for Back and Menu and a single physical button in the middle for Home. As the name suggests the Samsung Galaxy S WiFi Player 4.2 has a sharp and bright LCD display screen of 4.2 inches.

Samsung Galaxy S WiFi Player has an WVGA display screen with a resolution of 800 x 480 pixels. Samsung has somewhat improved the specifications for this model as compared to the previously launched Galaxy Players. This handheld device is powered by a TI OMAP4 single core processor with a clock speed of 1 GHz paired with 512 MB RAM.

The player would work on the 2.3 version (Ginger bread) of the Android operating system. However, according to Samsung the OS would soon be upgraded to Android 4.0 (Ice cream sandwich) version. One of the interesting things about Galaxy S WiFi player is that it would come in 2 variants based on the storage capacity. One variant will have a storage capability of 8 GB and the other one would be able to save data up to 16 GB. Another important feature is that this player has an extra storage capacity. The users can increase the storage limit up to another 32 GB by using Micro SD cards. Isn't it great? It is this feature that makes this device better than others in the market.

The Galaxy S WiFi Player has 2 integrated cameras. The rare and the primary one which would be used for clicking pictures is of 2 mega pixel and the front one which would be used for activities like video chatting is a simple VGA camera. The device can easily be connected to internet through the WiFi 802.11 b/g/n. The Galaxy S WiFi device comes with other connectivity options like USB 2.0 and Bluetooth 3.0 which can be used to connect to USB drives and other devices like mobile phones etc.

Samsung Galaxy S WiFi Player 4.2 comes with a 1500mA battery. Since there is no calling feature in this device the battery back is sufficient enough to give good usage for long hours.

Samsung is expected to launch its latest Galaxy S series WiFi music player in the US markets sometime late in the first quarter of 2012. So we can expect it to hit the US market somewhere in March 2012. Although there has been no official declaration on the cost of the device, but it is expected that the price of Samsung Galaxy S WiFi Player in USA would be somewhere in the range of $250 to $300.