Here I introduce a smartphone that will offer you durability much higher than your expectations. 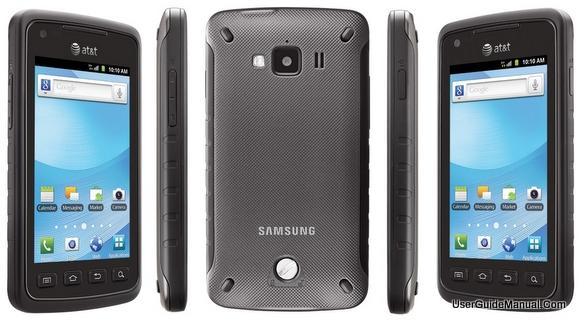 The Samsung Rugby Smartphone has been made to stand out even up to thirty minutes under water, intense temperatures, convulsive shocks, rain and dust. It is an Android powered smartphone with a display of 3.7-inch Super AMOLED screen.

On the first look, the Samsung Rugby Smart looks like any other smartphone. The display is a 3.7-inch screen. The screen is surrounded by a glossy black bezel consisting of a chrome covered AT&T logo. If viewed from the right hand corner it has a 1.3 megapixel front camera. There are four buttons on the bezel, each one for MENU, HOME, BACK, and SEARCH respectively, in a line. These well accommodated buttons have been provided by firm Spring Feedback.

On the sides, this smartphone is covered in a thick soft skin friendly plastic. Also, small plastic covering protects the ports provided for the headphone jack and mini USB port. These two ports can be found at the top and bottom of the phone respectively. On the left side of the phone, lays the volume controller on the right side lies the power button.

The rear panel of the Rugby Smart has been rendered with raised dots that gives a unique textured finish to the phone and builds a good grip to hold the phone. The rear of the phone consists of a 5 megapixel camera along the top with an LED flash. There also rests a pair of thin speaker slits. There is a large chrome screw just below the Samsung logo to protect the battery, SIM card and all of the interiors of the phone.

Created according to the Mil-STD 810F military specifications and standards, the Samsung Rugby Smart can withstand much more exploitation than any other normal smart phone. The covers of the port are air tight, and made up of tight rubber seal so as to avoid water and dust to seep through the ports openings. The rear of the phone has been provided by a large chrome screw so as to maintain the rear panel at its place and confirm the airtight security.

All of these protections help the Samsung Rugby Smart to endure even after being soaked less than one meter of water even after thirty minutes. It has been also claimed to be dropped from approximately 6.6 feet and also go through extreme temperature conditions of up to 110 degrees Fahrenheit.

But still, it has a major drawback that the touch-screen does not work under water submerged conditions. Hence, it will not be a favorable choice for the Snorkelers to take the phone with them on their adventures.

The 3.7-inch Super AMOLED 480x800p display has been embedded in this phone to deliver bright, vivid colors with the sharpest details which are very useful while zooming in and also reading text.

Although Samsung claims the Rugby Smart to be delivering the finest picture quality, however, many times slight perforation and pixilation cannot go unnoticed on the screen.

The full volume of the phone can fill a small room with decent amount of sound magnitude even through small rear speakers. However, small brassiness in the percussion can also be noticed.

The Samsung Rugby Smart offers three distinct keyboards: a Samsung keyboard, the standard Android keyboard and Swype. Trace technology is said to be fairly good for quick, effortless typing and email. Yet, hap tic feedback on all the keyboards is not up to the mark.

The Rugby Smart phone operates on Android 2.3 with Samsung Touch WIZ 3.0. There are a total of seven customizable home-screens represented by white dots on the bottom of the display. The initial default home-screen has a Google search bar, an Android Tips widget and icons for Calendar, Messaging, Market and Camera.

At the bottom of the home screen are icons for for Phone, email, Web and Applications. At the top, a bar has mini-notifications shade with shortcuts for Wi-Fi, Bluetooth, GPS, Airplane mode and Screen Rotation. Supportable to all Android Apps, the phone becomes a full-on user friendly entertainer.

This smart-phone comes with a 4 GB device memory and is expandable up to 32 GB using the micro SD slot.
Running on AT & T's HSPA+21 networks, the Samsung Rugby delivers quite decent performance of online services.

The battery of the Samsung Rugby Smart lasts up to 6 hours and 39 minutes, which is 56 minutes longer than an average Android phone, on average usage conditions.

The Samsung Rugby Smart is available in the market for $99.9. For those shoppers, who have durability and quality on the top priority, this is good choice.