Has the year 2012 been chosen as the year of rebirth of Xperia range? It is the first Xperia series phone after the Ericsson series and a look t the spec sheet shows that it has much more new to offer rather than just the new logo. Now let's move to the review of Sony Xperia X

First yet not best Smartphone (you will come to know we said like this once you complete reading this review) coming under Sony's flagship, it's Sony Xperia S. Finally, Sony has come-out with clean elegant look with a nice sexy transparent strip. Soft-touch plastic body has nice finishing across the device and a scratch resistant piano black on front.

It has a huge 4.3" mobile Bravia powered HD display. There are no physical buttons on front screen but there are touch sensitive buttons on that transplant strap; as these are present on the bottom edge there are many chances of slipping out of our hands while accessing them. On right hand side there is a volume Rockr and also there is button for quick access of camera. Sony did right thing by providing a dedicated physical button for quick capture of snaps which adds value to device. There is a power-cum-unlock button on top along with a standard 3.5mm audio jack. If we hold the device in hand we get a feel of carrying substantial thing since it has 128 x 64 x 10.6 mm dimension and 144 gm weight.

When we remove the back cover we have found that the battery is irreplaceable that's not often we see in high end mobile phones. There is no even Micro SD card slot means we have no other choice left except to use built in storage capacity. Sim card slot also is of a typical micro SIM means either you have to trim your sim or ask to carrier for replacement of existing one.

Sony Xperia S comes with 12 Mega Pixel still camera an Exmor sensor. In spite of having 12MP camera sensor it only captures photos in 4:3 format; if we want 16:9 view we need to switch to 9 MP mode. Practically there won't be much difference in picture quality of these two modes; both will produce decent quality images. It's just a technical specification change.
With having LED flash the camera even captures good quality images in low light conditions. You can capture full HD (1080p @30 frames per second) videos with ease. Say thanks to dedicated camera button because you don't need to unlock your mobile for sake of capturing good scenarios. Smile detection will be another plus point for this device.

It has been many months after ICS release by Google but we didn't understand why Sony still struck with Gingerbread OS while the other peers like HTC and LG are releasing new mobiles with ICS. But, one thing to cheer about is, the promise of ICS release by Sony. Sony has announced that Xperia S device will be getting Ice Cream Sandwich update in coming months. However, presently you will have to do with the Android 2.3.7 in it.

Sony Xperia S has a tight social integration, Gmail, Facebook, Youtube, an additional camera application, Google Maps & Play Now are the other applications which will be pre-installed on the device. It will be having Google Play (f/k/a Android Market) application.

Unlike the previous devices on this series, Sony Xperia S has a decent Timescape interface with good customizable widgets like toggles, photo frames and other music controls along with native support for live wall papers. We can customize the all 5 home screens as per our interests. Mobile Bravia engine really adds value in boosting display contrast and gives fresh and crisp looks.

The device is PlayStation certified, do you know what it means you can avail all PSOne classic games to play. With this 341 ppi display and dual core processor you will get nice gaming experience on the device. High definition games also give rich experience while playing them on Sony Xperia S.

As a premium range mobile it is necessary to have a good music player, Sony won't disappoint you in this case. Walkman Music player will be providing Track id for each and every song and you can simply navigate to your favorite song with simple steps. 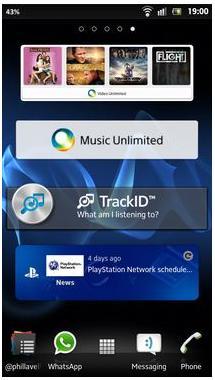 Near field Communications feature will provide access to device within defined distance. As of now this technology usage is very less but really it will be game changer when all other companies adopt this feature. We can see m-commerce applications in near future which will be basing on NFC. The people in US have already started using Google Wallet service.

Distinctive Hardware specifications and nice looks and blazing camera performance make it good bet for purchase. Absence of ICS only may disappoint you for a period of time.

Are you looking to buy the new Panasonic Eluga U? With its latest flagship model, the Eluga U priced at Rs. 18,990, Panasonic attempts to revive the Eluga brand. Read the article to know its design, features, price & review.