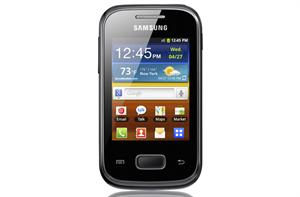 Keeping an eye on the smart phone scheme "a phone for every finger, fat or thin", Samsung the top manufacturer of electronics products is expanding their business with Galaxy range of handsets by unveiling the Samsung Galaxy Pocket at an affordable price. The Samsung Galaxy Pocket is not designed to compete with any models of its arch rivals Apple, Sony and Motorola. This 2.8-inch Android smart phone is powered by Android 2.3 Gingerbread OS. Running on an 832MHz single-core processor the galaxy pocket will have a 2 mega pixel camera.

As the name proposes, being a pocket-sized smartphone the Samsung Galaxy Pocket is for customers with less money as budget in pocket. Some special features of the galaxy pocket will be TouchWiz, updated user interface which helps users to handle frequently used functions with much ease. Through the improved writing function users can browse the web much faster or type messages with less time.

The Galaxy pocket has an internal memory of 3 GB which is much enough to store applications, MP3 songs, photos and videos. But with a micro SC card, the memory can be expanded to 32 GB. Having a thickness of 11.98 mm and weighing only 97 grams, the galaxy pocket will be an ideal portable device. With the inbuilt FM radio, you can tune into your favourite radio stations. With high speed connectivity options like Wi-Fi and HSDPA 3.6 fast web browsing, sharing contents via social networks are possible in this device.

ChatON a specially designed Samsung app will help users to come under a single shade which offers instant messaging, group chat etc. Through the Social Hub users can store messages, social networking short messages and emails in a single inbox. With the galaxy pocket, Samsung has taken few steps back in bringing up a device in a much lesser size.

Even though the price of Samsung Galaxy Pocket in India, China, Australia, Europe, Asia-Pacific, North and South America is not known, the cheapest device from Samsung, the Galaxy Pocket smart phone will be available in the following regions later in 2012.

Samsung Galaxy Pocket Plus phone is reported to make an early launch either during the last week of December or early January 2013. This entry level device code named as GT-S5301 will run Android 4.0.4 Ice Cream Sandwich OS. Read more about the other features of this phone in the article.