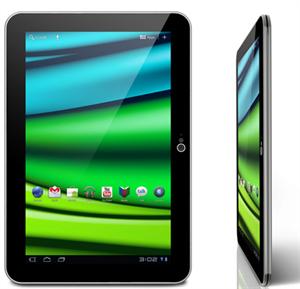 Toshiba Excite 10 LE represents resolution of 1280 x 800 pixels which is having aspect ratio of 16:10. Its display looks good with minimal air gap that vary viewing angle. If we compare Acer Iconia Tab A700 text and graphics with Toshiba Excite then Toshiba Excite does not offer that much sharp and high resolution.

Toshiba Excite 10 LE tablet is of 10 inch and consist of Android 3.2 Honeycomb, which is up gradable to Android 4.0 version. Actual dimensions of Toshiba tablet measures 10.1 inch with resolution of 1280x800 pixels. The touch screen uses IPS display with Gorilla Glass. Toshiba consist of 1.2 GHz OMAP 4430 processor with ability of dual core processing.

Toshiba Excite 10 LE internal RAM is of 1 GB and it offers storage capacity of 16 GB and 32 GB. The price varies from model to model such that 16 GB price is $ 530 and 32 GB price is $ 600. The microSD slot is also there. Moreover, Micro HDMI ports are available for connecting tablet with television. It means users are capable of connecting Television device to tablets. So, it is good option to buy this tablet.

For capturing photos and memories at your device, it offers 5 Mega pixels rear facing camera with LED flash that allows HD video recording of 1080p. For the purpose of video calling and video conferencing, it includes 2 Megapixels front facing camera. For internet connectivity there is Wi-Fi connection, which uses standard of 802.11b/g/n. Moreover, for sharing files and documents, Bluetooth 2.1 + EDR are used in the tablet. The ports placements are designed along the edge for ports like headphone jack, micro-USB, micro-HDMI, and microSDHC.

Toshiba Excite 10 LE will suit you if you are looking for world lightest and thinnest 10 inch Android tablet. It offers good buying deal for you at two different prices such that 16 GB version price is $ 530 and 32 GB version price is $ 600. It is expensive tablet in comparison to Asus Transformer Prime tablet but still its super thin dimensions will force customers to buy this tablet. After comparing Toshiba Excite with Apple iPad 2, you will come to know that its weight is even less than Apple iPad 2. So, what are you waiting for? You are getting a good Android tablet to buy. Rest, the decision is yours.