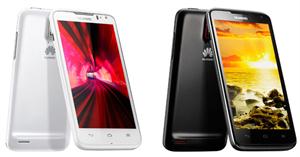 Leading global information and communications technology (ICT) solutions provider Huawei has made a leap forward by introducing the Huawei Ascend D quad, world's fastest quad-core smartphone. Already the company had made news by launching the world's slimmest smartphone, the Huawei Ascend P1 S. As expected the technology world is buzzing up with innovative devices unveiling before the public. The 4.5 inch Ascend D quad phone is powered by Huawei's K3V2 quad-core 1.2GHZ/1.5GHz processor and runs on Andriod 4.0 OS. According to Huawei, the special power management system will save up to 30% of energy.

As most of the smart phone users do demand better speed, long-battery life, best quality visual and audio capabilities, and a handset with lightweight, Huawei had come up with a smart phone to satisfy them.

The 4.5 inch touch screen device do have an 8 megapixel camera and give an extra bonus to music enthusiasts with its Audiance earSmart voice technology to give full entertainment. The 1800mAh battery of Ascend D quad will last for two days with its enhanced power management technology. The smart phone runs of Andriod 4.0 OS.