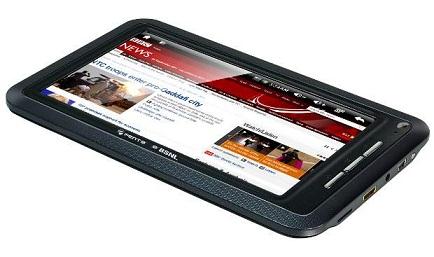 This is the era of cheapest tablets in India; everyone is keen to produce cheapest tablets for students. This tablet revolution is not restricted to India but many other countries in the world like USA, Canada, and Malaysia etc. are looking forward to produce cheapest tablet in their country. After success of Aakash tablets in India, one more company jump into the cheapest tablet manufacturing and this is none other than BSNL. It is enriching the market with its three tablets and all of them are representing different prices. If you are willing to buy cheapest tablet then we have good news for you. BSNL offers Penta Tpad IS 701r tablet which is much same like Aakash tablet but having few additional features when compared to it. Indians are aware with BSNL but in case you belong to countries like USA, Canada, UK, Australia, Malaysia etc. then you should know about BSNL. BSNL stands for Bharat Sanchar Nigam Limited, a leading telecom operator in India which made an agreement with Pantel for launching 3 PC tablets for students.

For the purpose of Internet connectivity, BSNL tablet includes Wi-Fi connectivity and 3G dongle support through which you can easily access the Internet world. If we make comparison between Bsnl and Aakash tablet then BSNL Penta Tpad IS 701r tablet PC gives best rated reviews. The BSNL tablet also comes with 1 year Warranty and it is expected that BSNL tablets will got more success because of various internet usage offers given to school and college students.

Bsnl Penta Tpad IS 701r tablet PC price is very affordable as it offers 1GHz processor with HDMI port which is highly enhanced specification in comparison to Aakash tablet. It is BSNL tablet specifications and price which is forcing customers to go for it. The price set for BSNL Penta Tpad IS 701r tablet PC is Rs 3250 which is not too much high in comparison to Aakash tablet price. Now, Indian customers are provided with two options- either to buy Aakash tablet or to go with Bsnl tablet. It is good deal to get. It will be interesting to see stats of tablets sales in coming months.

Really it is a very good tablet, but it should have a rear camera also. If I want to buy it how can I get, how much time it will take?

Bsnl Penta Tpad IS 701r is work as phone or not. Like ubislate7+

You need not to worry about time. Pantal executive are saying that it will be available on retail shops and outlets from 1st march 2012. we are hoping that Bsnl tablets will come to market soon.