BSNL has tied up with Pantel Tablet PC manufacturer recently. Bharath Sanchar Nigam Limited (BSNL) has launched three different range Tablets PCs, one of them is cheapest priced tablet PC and it has named as Penta Tpad IS 701r Tablet PCs from BSNL. Penta Tpad IS 701r Tablet PCs priced with Rs 3250. This is one of the hot topic in Tablet PC market in worldwide. This is the good opportunity for business users and students to grab the cheapest Tablet PC in India.

Aakash Tablet PCs has its other competitor in India for low cost tablet sale; it is Pantel company associated with BSNL India. Pantel Tablet PCs is from Noida, it has produced so far three tablets PCs that will be distributed with discounted data plans from BSNL. The three tablets PCs detail and price stated as follow. Now you have option that you can buy low cost or cheapest Tablet PCs in India. 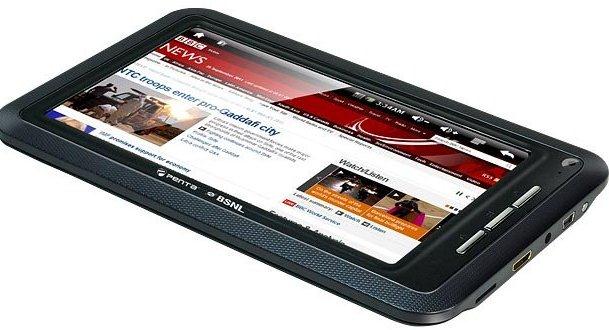 BSNL have overall launched three different range Tablets PCs in the row, two of them comes with 7 inch resistive touch screen, and another tablet released with an 8 inch capacitive touch screen. You will find 3G connectivity with speed processor of 1.2 GHz in Tpad WS802C tablet. All of them have Google's Android 2.3 OS - Ginger Bird. You will find other two BSNL tablet name and detail herein.

You can compare BSNL tablet PCs with other Tablet PCs from this site.