Branded PC Computer and Tablets PCs manufacturer are ready to update their system for the future generation and success their PC business. They are testing forthcoming new Windows 8 Operating System to use on their devices to attract and cover the future market. Most of the branded computer manufacturer across globe expecting the release date of Windows 8 OS Consumer Preview by end of Feb 2012.

The new operating system from Microsoft will eventually help for all the devices regardless of its memory; there is news that Windows 8 OS will use lesser memory than Windows 7 OS. Also, Windows 8 OS Consumer Preview installation process is almost same as Windows 8 OS Developer Preview. 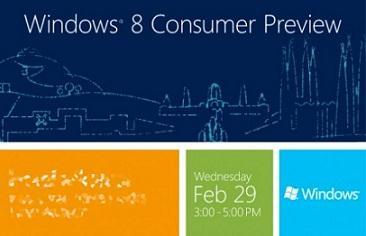 By observing Windows 7 OS, we can definitely say that Windows 8 OS will be advanced and better than Google Androids OS. This is nothing but Microsoft has to add its value and its various features on Windows 8 OS to chase all other Operating Systems in the competitive business market. There are large numbers of Microsoft fans across globe and Microsoft aware that they have to launch Windows 8 OS matching the fans' requirement plus suit all devices for the future trend set up. Windows 7 OS upgraded to Windows 8 OS, whereas Google Android upgrading from Froyo OS, Honeycomb, Gingerbird and 3.2 to 4.0 Ice Cream Sandwich OS and so on.

Tablet PCs vs Laptops and its OS

You will just find the difference between various Laptops and Tablets PCs and their operating system. Laptop has to have keyboard and some detachable keyboard to use as tablet PCs that comes like from Asus. Most of the latest Operating Systems are similar like touch integrated to ensure it matches both laptop and tablet PCs. Tablets will have five to ten inches size option, whereas Laptop could be from six to eighteen inches screen size. Tablets come for optical usage, video calling, 3G and more option, no external keyboard and multi-choice of apps to download by just carrying it in anywhere whereas Laptop has limited features and options.

New OS in the computer market

There are already many Operating Systems in the computer markets like Apple's iOS, WebOS, Noble Nook OS and Kindle fire OS exists including Android OS and Windows 7 OS that matches perfectly for all the Tablet PCs or some Laptops devices. Since these OS are only meant for small devices to power the OS for touch integrated to result better output, thus many focus on these outstanding facility. Now, Microsoft is little special in this case that their upcoming Windows 8 OS will have multi-choice to use it in Laptops, Desktop and Tablet PCs whereas Android or other tablets OS can't be used it well for Desktops and few Laptops.

Wherever you see, you may find Tablet PCs in the computer shop or big shopping malls. It looks like time is changing and new trend setting up differently. Hope young generations are more fascinated toward Tablets PCs that comes with reasonable price with great feature somewhat related to mobile phones and looks friendly touch type.

There are so many branded tablet PCs released early, one of the famous operating system for tablet was Android OS, although there were some different tablets released by Apple, and some from WebOS of HP. Acer and Asus used both the operating system like Google's Android and Windows 7 OS. When Apple dominates once the tablet market, new comers like the Noble's Nook OS and Kindle Fire OS have somewhat changed its lead. After releasing of Windows 7 OS then tablets market got even extra competition. From these we can understand that any Computer manufacturer has to stable their own market based on their own choice of operating systems selection.


Who will succeed in new Operating System

Every computer company like to succeed and wanted to be in the list of top one for consumer favor on their products. In case if Microsoft wants to succeed in the tablets market other than its PC and Laptop division, then Windows 8 OS has to chase Android's lead, Apple's lead and other famous OS like Noble and Kindle OS etc. in the tablet market, it should be within the consumer favor.

With Apple's iPad leading and Microsoft's about to enter in tablets with Windows 8 OS, Google's Android OS for tablets may never understand its full potential. After the end of HP's WebOS, though, HP already told that it would design and market a Windows 8 OS.