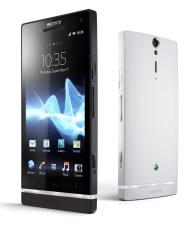 The tech savvys are eagerly waiting for the Sony Xperia S, the new smartphone from Sony Ericsson. The flagship product, also known as Sony Ericsson Xperia Nozomi and Sony Ericsson Arc HD, was announced in the Consumer Electronics Show in January.

The phone measures 128 x 64x 10.6 mm and weighs aboutt 144 grams. Sony Xperia S sports a 4.3-inch LED-backlit LCD multitouch screen made from scratch-resistant glass. It has a resolution of 1280 x 720 pixels. The display is powered by Sony's Mobile BRAVIA Engine. The Xperia S is powered with a 1.5 GHz QualComm MSM8260 SnapDragon processor which makes it the first dual-core Xperia handset with a Scorpion processor. The phone runs on the Android Gingerbread 2.3 Operating System which is planned to be upgraded to the Gingerbread 4.0. The handset has got a 1GB of RAM and in-built memory of 32GB.

The Xperia S sports a 12 MP camera with resolution power of 4000x3000 pixels. The usual smartphone camera features such as Autofocus, LED flash, Geo-tagging, Touch focus, face and smile detection, 3D sweep panorama and image stabilization are facilitated in this as well. The camcorder can record videos of 1080p at the speed of 30fps. It features continuous autofocus, videolight and video stabilizer. The phone has also a secondary camera of 1.3 MP which can record 720p videos at 30fps.

It was a few days later the phone announcement, Sony revealed two more features of of the Sony Xperia S. The Xperia S is said to come with an anti-stain shell. The phone is treated to a special nano-coating material that makes it dirt-repellant and UV active at the same instant. Also the phone is said to a feature a fixed power pack that has fast charging capabilities. With that, the phone can work upto 1 hr with a 10 minute charging. The full charging time of the Xperia S will also be reduced in half with this power pack.

The Xperia sports NFC ( Near field Communication) which allows the users to share files with others having a NFC device. Anything including files, documents, music , videos and even Wi-Fi can be shared by simply touching the two similar devices.

The Sony Xperia S is expected to be released in March 2012. Although the company hasn't revealed much about its price, the phone is rumoured to be set around Rs. 21000.