Idea has launched 3G smartphones in the market in order to promote their 3G services in India. Idea is also offering exciting 3G offers along with this 3G smartphones. These 3G android platform smartphones are available at low price along with a 3G benefit of Rs 3500. This article is on Ithe features and specification of Idea blade from Chinese company ZTE.

Idea Blade is a 3.5 inch screen smartphone with features like 7.2 Mbps HSDPA, Live TV, Capacitive touch and special applications for Facebook, Google and Youtube. It is running on Android 2.2 Operating system and is also equipped with a 3.2 Mega Pixel camera. The memory can be extended upto 32 GB. The phone is priced Rs 7992 along with a 3G benefit of Rs 3500. 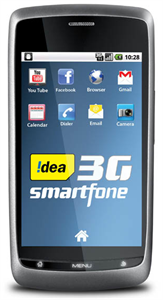 Idea is offering Blade 3G android smartphones at Rs 7992 along with 3G benefits of Rs 3500. The main aim of Idea cellular network is not to make profit from smartphone market. They are trying to promote their 3G network in India.