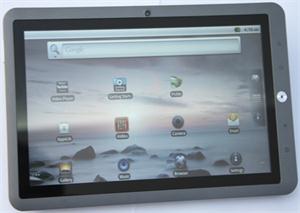 After the official launch of the Aakash, the cheapest tablet in the world, there had been tremendous waves around the globe to know more about the device. Aakash which is said to be the next choice of students for boosting their class room activities had been sold out with in few days of its sales kept online. The commercial version of Aakash, Ubislate 7+ (Plus) tablet is now available for pre order online.

Adding more fuel to the interest of the public to get cheap tablets, here unveils a tablet from Delhi based education solution provider Classteacher Learning Systems. Rohit Pande, the CEO of Classteacher Learning Systems who has developed the Classpad aims to give an advanced learning experience for the Indian students' community. The Classpad is being developed to suit the taste of students between 3 and 12 standards. This device is build up as a interactive e-reading device which can hold thousands of books inside. So now your favourite book is just a click away. The tablet is well equipped with software which can be connected to interactive whiteboards making the class room make livelier.

The Classpad which is build up in Android platform boasts of some special features. This device has a touch screen; powered by a 1.3 Ghz processor, build in memory of 4 GB which can be extended up to 8 GB using a microSD card slot. The Classpad has a powerful battery and is expected to work for more than 7 hours with a single charge. This device would boost up the performance of the students in their class room activities.

The biggest problem faced by the teachers in a classroom is the differentiation in the learning capabilities of the students. Classpad which is being well designed can help the teachers to categorize students in to fast learners, average learners and slow learners according to their learning capacity. So with out providing special classes teachers can teach all students in one schedule.

The tablet would reach the market in two models; the Trolley model and the 'one tablet per child' (OTPC) model. As in the Trolley model one device is being shared among students as one child has to pay Rs 100. In the 'one tablet per child' (OPTC) model, one unit can be bought by paying the price. The Classpad tablet would come at different price tags depending upon the model. The classpad comes in three models. It would be Classpad 7, Classpad 8 and Claspad 10. The tablet would come at a price ranging from Rs 7,500 to 14,000 and will be soon available in parts of India.

Where can we buy Classpad ? I am looking for a cheap tablet to give as a gift to my best friend. Is this worth buying? I want to read some honest, genuine hands-on reviews of Classpad.