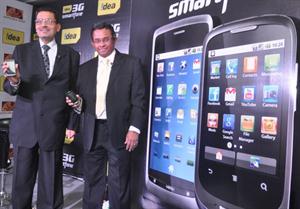 India's leading cellular operator Idea has launched 3G Android smartphones in the market to widen their 3G services in India. The Managing Director, Hindu Himanshu Kapania and Chief Marketing Officer Sashi Shanker informed that the launch of new range of smartphones to promote their 3G services and to attract their existing 2G users to its 3G services. Currently two types of Android phones have been launched under the banner of Idea. 2.8 inch display screen !d-280 smartphone is available at Rs 5,850 and 3.5 inch screen Blade smartphone is available at Rs 7992 in Idea stores. Idea is also offering a 3G benefit of Rs 3,500 along with this smartphones. Also a lot of special 3G offers have been introduced by Idea. The Rs. 259 pack offers free subscription to Idea TV for three months, 1 GB of data download per month for three months, 3G 'double dhamaka' benefits for six months and a talk time of Rs. 25. This special introductory offer will be available for both prepaid as well as post-paid users.

Chinese firm Huawei !d – 280 is a 2.8 inch screen smartphone with features like 7.2 Mbps HSDPA, Live TV, Capacitive touch and special applications for Facebook, Google and Youtube. It is running on Android 2.2 Operating system and is also equipped with a 3.2 Mega Pixel camera. The memory can be extended upto 32 GB. The phone is priced Rs 5850 along with a 3G benefit of Rs 3500. Chinese company ZTE Blade is also having similar features of !d-280 ruuning on Google android OS. But the screen size is 3.5 inch and it is priced Rs 7992 along with rs 3500 3G benefits.

Idea is also planning to launch 3G tablets in India, but they have not yet made any official announcement regarding this news. They clearly informed that they don't plan to enter the 3G handset business. Their only objective is to create the ecosystem for 3G penetration and hit an affordable price point.

To get more information, you can contact the customer service desk on Toll Free number - 18002700000

Idea Zeal 3G smartphone full specifications, features and price in India are given here. Idea Cellular, one of the leading telecom network which had entered the mobile market a year ago has announced the 'Zeal', a brand new Android smartphone for the Indian market. Idea Zeal, the fifth smartphone from the company supports 3G connectivity and dual SIM capability.

hey show me the images of idea smartphone which is in 3500rs..thnx