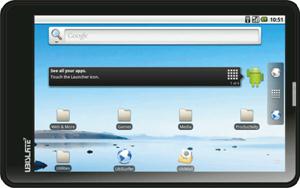 'Aakash' has become one of the most buzzing words on internet just after its official launch 2 months back. As per statistic reports one of the most searched word in internet between 2011 October – December is none other than 'Aakash'. Just now Datawind, the manufactures of Aakash has announced the availability of the online sale which is priced at Rs.2500. Those who wish to own a piece of this device can buy online by visiting the official website www.aakashtablet.com and can place order in the available form. It is known that the tablet would be available just with in 7 days after placing order in the website. Users do not need to make any pre payment as the cash would be taken after the delivery of the tablet at your door step. The pre order of the advanced version of Aakash touted as Ubislate 7 priced at 2,999 would be available in late January 2012 while the pre order booking has started in the official website.

The following chart will help you to know the difference between Aakash and Ubislate 7.

The entry of Aakash is expedited to bring a boom in the country which aims to connect the rural areas too. Lot of institutions and students already had shown interest to have this device which is offered at an affordable price. The advanced version named as Ubislate 7 is an advanced version of Aakash which has a powerful processor giving much better performance than the student's tablet. The Aakash tablet already had steeled the hearts of millions around the world which comes under an ultra low price. If you wish to own an Aakash tablet do book online through the official website.

This article is about Aakash Tablet. Read the article to know complete Aakash specifications, features, price and news. Aakash Tablet is the world's cheapest tablet released by HRD minister on October 5th 2011. This Tab is available for only Rs.1,200/- for students after subsidy by Government of India.

where from I can purchase this tablet

I want buy this. but from where can i get this one.

where from I can purchase this tablet

when the online booking will be avilable for aakash tab.

what is price of ubislate 7 for student ?

akash tablet is also a phone or not