Few days back, Microsoft has released two phones in world market which will be available to most parts of the world soon. Two Windows phones include Windows Nokia Lumia 710 and Windows Nokia Lumia 800. Both these phones come with new user interface which is new to Nokia family. Both Nokia Windows Phones prices are also very high in comparison to early Nokia phones, and reason which is responsible for high cost price of Nokia phones is the Windows operating system which sets base for them. We know that Microsoft is known for its operating system so everything that deals with Windows OS will also be expensive. So, it is expected that Nokia Lumia 800 will be cost around Rs 30,000 in India and European countries. 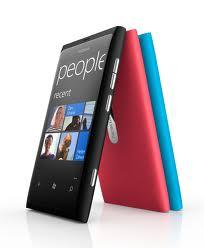 Nokia Lumia 800 phone is coming to market soon and we have a lot of buzz about Windows Nokia Lumia 800 phone which is having 3.7 inch AMOLED touch screen display that supports 3D graphics with clear black screen that offers multi-touch input selection. It also includes Proximity sensor, Accelerometer sensor, Touch-sensitive controls for getting high resolution for graphical contents.

Windows Nokia Lumia 800 phone is having 7.5 mango operating system version which is powered by 1.4 GHz with 512 MB of RAM. Its camera will be upgradable to 8 megapixels at rear end and it offers high capturing resolution for pictures and images with auto focus and LED flash. Nokia Lumia 800 provides internal storage of 16 GB and free 25 GB sky drive space. For purpose of internet connectivity, it provides 3G connectivity, Wi-Fi, GPRS, Bluetooth and EDGE for web surfing and social networking accessing. Moreover, it allows contains USB port connectivity with system and cannot have card slot for card insertion. It is available in black, cyan and magenta colors.

The Windows Nokia Lumia Phone is having resolution of 800 x 480 pixels with dedicated key for back, search and start. It supports high definition video recording at rate of 30 frames per second with 720p. For easier data accessing over the web, it involves Internet Explorer 9 and HTML 5 applications. Nokia Lumia 800 battery life is so strong which provides backup of 1450 mAh and stand up to 335 hours with dimensions of 116.5 x 61.2 x 12.1mm and weight of 142 grams. 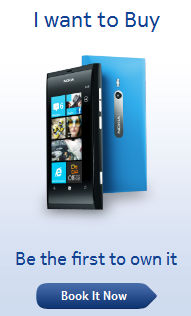 If you not want to book it on mobile then you can visit on Nokia website and then load Lumia 800 page, it will provides you with a form from where you can book your Lumia Smartphone.

It is expected to arrive in market in month of December 2011 and you will get it at price of Rs 30,000. Its price is more than other smart phones and you can book it online by paying Rs 3000 and it will be easily available in major cities of India like Bangalore, Mumbai, Hyderabad, Kolkata, Gurgaon etc. It is also available on Nokia website from where anyone can book phone online in in India, USA, Canada and U.K.