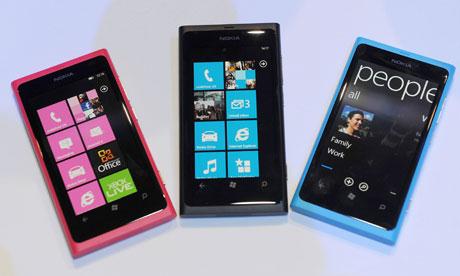 Nokia's Windows smartphone Nokia Lumia 800 is ready to hit Indian Market. Lumia 800 is Nokia's first Windows phone to launch in the market and is running on Windows Phone 7.5 Mango OS. During the launch of Lumina 800, Nokia compared Lumia 800 analogues to BMW 5 series and the higher variant and lower variant of Lumina 800 will be sooner launched in the market. The low variant 3 series is Nokia Lumia 710 while the high variant 7 series is going to be ace in the smart phone market which is not yet announced. Nokia Lumia 710 will be available sooner in the market while we may have to wait for another couple of months for the announcement of its higher variant. But Nokia promised that it will be a new revolution in smartphone industry. Lumia 800 is expecting a good response in the ,market which is being dominated by Samsung and Apple iphone. They also have to compete with the HTC Titan and HTC Radar which are running on the windows same Mango Operating System. Nokia is expecting a hike in their market sales with a hand together with Microsoft. Currently most of the smartphones (Samsung and HTC) are using Google's Android OS on their phones. Windows is also trying to improve their presence in smartphone industry and they are planning to strengthen it after the launch of Windows 8. Nokia has already planned to launch their tablet running on Windows 8 by June 2012.

Nokia Lumia 800 is coming with a 3.7 inch screen and 800 by 480 pixels high sensitive 16-bit AMOLED Clear Black display . The screen size is little bit smaller their previous hit Nokia N9. The dimension is 116.5mm x 61.2mm x 12.1mm and weighs only142gram. It is equipped with 1.4 GHz MSM8255 Snapdragon/Scorpion CPU. It has an 8 MP, 3264x2448 pixels, Carl Zeiss optics, autofocus,dual-LED flash camera. But it does not have a secondary camera, which everyone of us is searching for. Nokia may have planned to sort out this problem in the upcoming higher variant of Lumia 800.

How to Pre Order Nokia Lumia 800 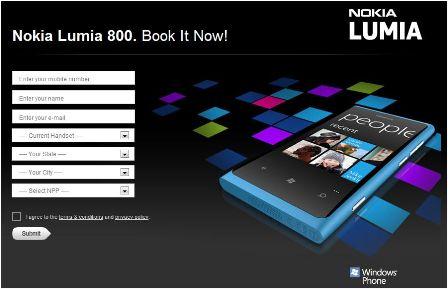 You can pre order Lumia 800 and can make sure the early availability of the phone. Pre order booking is available in the official website of Nokia India. The url address is www.getnokia.in/lumia800. As you open the link given here, you can see a window as shown here. You have to enter your mobile number (Valid and number in use), Your Name, e-mail address, your state and city. After submitting the details, You will receive a SMS and e-mail from the Nokia India customer help desk saying Your booking request for the Nokia Lumia 800 has been received. They will also provide you with a reference number. Team Nokia help desk will contact you shortly for further details. Definitely Lumina 800 is a nice phone for Nokia lovers, but Nokia have to fight hard with their rivals for the good marketing of Lumia 800.