Aakash tablet got success in global market. Many countries are showing interest in purchasing Aakash tablets at student discount price for their respective country but no one is able to get it right now because its production amount is less. In India, many professionals and IIT students used Aakash tablets and complaining many issues like over-heating of tablet in an hour or so, low battery life, slow speed of processor, tablets hangs in between and installation of software causing troubles. So, Indian Government decided to put some new features in existing tablet with more advance technology which will remove all those problems occur in previous version. The new tablet is named as Aakash 2 tablet which is going to be released in the year 2012.

It will expect to be released in months of February or March 2012 with new features and configuration. Many users also complaining about YouTube videos such that they are not able to watch videos on YouTube and even unable it download new apps from Android market. So, these limitations force Indian government to put forward with new Tablet interface i.e. Aakash 2 Ubislate 7 tablet. 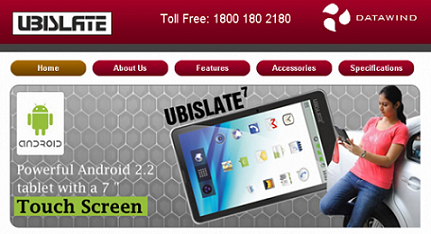 The new upcoming Aakash 2 Ubislate 7 tablet is having new processor so that slow performance of the tablet can be enhanced. Earlier Aakash tablet consist of 366 megahertz processor which is now replaced with 800 megahertz processor. It is new microprocessor which is expected to solve existing tablet problems like overheating, freezing, poor sound quality, incompatible formats, installation of software, downloading of videos from you tube. After taking all these problems in mind, the new Aakash 2 tablet has many updations in comparison to Aakash 1 version.

The processor along memory limit enhances performance and throughput of any device. So, new processor is linked with new RAM of 1 GB which was earlier 256 MB is size. It is RAM which is known as main memory and we all know that how important main memory is? So, it should be high for concurrent processing of the programs in system. Moreover, you can easily make surfing on tablet device and download videos from YouTube also. It also maintains multi-tasking environment in Aakash 2 Ubislate 7 tablet.

Aakash 2 tablet is also available at same price of $ 49. It is Human Resource Development minister, kapil Sibal who responded towards Aakash 2 tablet launching in United Nations Conference in Paris and said that it will be available with some improvements for "children of world". The next target of Indian government is to meet prescribed target of two million Aakash tablets and it still remains a crucial question.

Aakash Ubislate 7 - The cheapest tablet available in the Indian market

Akash Ubislate 7 is known to be the world's cheapest tablet available so far in the market. Aakash is creating a new revolution in the tablet market. We are providing you the link to book your Aakash tablet online and to make all queries related to the tablet. Read the below article to get more details.

This is an article which gives you the comparison between the Aakash tablet and the Ubislate 7 which are the world's cheapest tablet. Many people are now confused on which one o buy in this. As off now only the Aakash tablet which is for students is now for sale and the Ubislate 7 is expected to be released by the end of January 2012. Here by I would have compared all the features between these two tablets and make you clear on which tablet to buy for your use.

i m engineering final year student in electronics and comm.
i am study in government engineering college in bhavnagar .
how can i get this aakash or ubislate .........?

plz give me some suggestion and information about this.

U can order the latest ubislate 7 tab at their website www.aakashtablet.com .......delivery will be in 2 weeks BY HIMANSHU