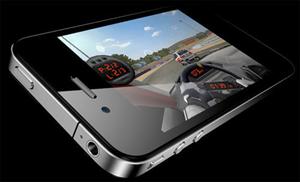 Bharti Airtel has started the pre order online booking of Apple iPhone 4S in India. They have made the official announcement that the iPhone 4S will be available on November 25th and pre order booking option in their official website. Aircel India made the first announcement regarding the launching of Apple iPhone 4S in India. They had announced that the iPhone will be available from onwards and pre order online bookings would start from November 18th. But everything has turned around. They have not yet started the online booking facility. They had put up in the google ads regarding the same, but now they are telling that the iPhone is coming soon. On the other hand, Aircel who were all set to start pre-booking of iPhone 4S in India have removed the statement completely from their site. Initially Airtel had not given any information regarding the availability or pre booking details. But fortunately Airtel has started the pre order booking from November 18th onwards. So it is a clear indication that only limited number of iPhone 4S will be available initially. 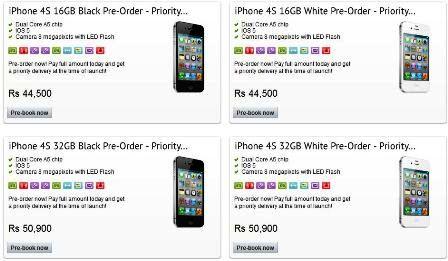 Although Aircel had made the first announcement regarding the pre orders of iPhone 4S in India, Bharati Airtel started pre order booking first in India. They have started the pre booking in their Official website of India. Now pre orders for iPhone 4S 16 GB and iPhone 4S 32 GB are available. As per the information given in the website, you have to pay the full cash at the time of pre booking and the hand set will be made available to you on the day of launching of iPhone 4S in India by Airtel. Iphone 4S 16 GB is available at Rs 44,500 and iphone 32 GB is available at Rs 50,900. They have not yet provided any details on iPhone 4S 64 GB. 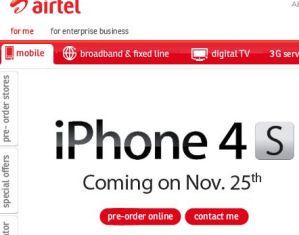 The price of iPhone is much higher the expected price and the common people in India have to find some other way to buy it. As of now, the factory unlocked iPhone 4S are available in US, Hong Kong and Singapore. The price of iPhone 4S is cheaper than India in these countries. Hong Kong is the best option as iPhone is available at a little cheaper rate. The link to Pre order iPhone 4S in India is given below. As soon as you open the window, you can see a window as shown on the right side.

You have to click on the Pre Order button to make your booking. Here is the link.
http://www.airtel.in/iphone/