Aakash Ubislate7 Tablet is creating a new revolutionary in the tablet market. The much lower price of Aakash is attracting a lot of people to buy Aakash. Aakash is known to be one of the world's cheapest tablet available so far. Indian government is taking a good initiative to make the availability of Aakash every where in India. Sooner the government policy will change to one Aakash tablet per child in India. Aakash will obviously decline the selling of Apple ipad and Samsung Galaxy tabs in India which are priced almost 10 times more than that of Aakash Tablet. But definitely the features and processor in those tablets cannot be compared with Aakash. Aakash is mainly focusing on the students to make the use of Internet easier. A fair amount of tablets have already been supplied to the government's National Mission for Education at a price of Rs 2,250. These tabs are being used by the students of IIT's BITS Pilani and some other major universities. They will also give their feedback for the further development required in Aakash. 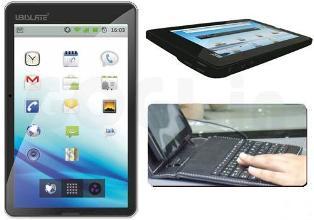 Aakash has been developed by Datawind, a UK based Software Company. The 7-inch Aakash tablet is powered by Android 2.2 operating system and made available with high quality web anytime and anywhere. The display is coming with a 480 x 800 pixels and resistive touch screen. All modern features for internet connectivity including GPRS and WiFi are also equipped along with easy access to Web, Email, Facebook, Twitter and much more in the tab. The main aim of introducing Aakash is to make easy internet availability and high quality video streaming for educational purposes. This tablet can be used as a normal mobile phone. Special ports are made available to use all kind of USB. Aakash is coming up with a 2 GB internam memory and 256 MB RAM. The storage memory can be extended up to 32 GB using a microSD card. It supports AC3, MP3, AAC, WAV and WMA audio formats and FLV, AVI, MP4 and Mpeg video formats.

Book and buy your Aakash Tablet

You can book the Aakash Tablet and and buy it online. We are providing you the link to book and make all queries related to Aakash Tablet. The link is provided below. Copy the link and paste it on the address bar of your browser.
The link is:
http://www.aakashtablet.com/How-to-buy-Aakash-tablet.html 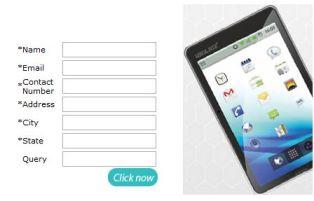 Once you open the page, you can see the window as show on the right side. You have to give your Name, email address, contact number, home address, city and state. You can also post your queries regarding the tablet. The customer desk of Akash Ubislate will contact you by mail or phone to your queries.

The Aakash Tablet is priced around 55 USD . The recent reports show that the tab will be available at a price around 3000 Indian rupees. But the Indian government is giving subsidy to these tabs for students. So it will be priced around 2000 rupees under government subsidy. DataWind, the manufacturers of Aakash tablet have announced that they will sell the tablet in retail with the name UbiSlate7. They are also make for the proposal of Aakash 2 with a faster 700 MHz processor at almost the same price. In order to make Aakash-2 smarter it has decided to include a built-in camera to it, to ensure video chatting facility to its users. The currently available Aakash tab is not suitable for any professional or business users. But Aakash is the most cheapest and suitable tablet for students.

This is an article which gives you the comparison between the Aakash tablet and the Ubislate 7 which are the world's cheapest tablet. Many people are now confused on which one o buy in this. As off now only the Aakash tablet which is for students is now for sale and the Ubislate 7 is expected to be released by the end of January 2012. Here by I would have compared all the features between these two tablets and make you clear on which tablet to buy for your use.

I want to get an Aakash Tablet.

i need this because i dont have money to buy any other tabs..relese the date in hyd as soon as possible.