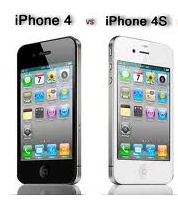 After great success of Apple iPhone 4, Company comes with a new device which is named as Apple iPhone 4S. Many users are confused with both devices names which look similar in approach except world "S". After going through the article, you will come to know that what word "S" depicts and how Apple iPhone 4S is different from Apple iPhone 4? When are talking of Apple design and specifications then both iPhone 4 and iPhone 4S look identical as both have glass sandwich design. It is only letter "S" which adds speed improvements and high storage capacity. It is matter of speed and storage which comes with Apple iPhone 4S.

Apple iPhone 4S goes one step ahead of iPhone 4 by including Siri voice-activated personal assistant technology with an A5 processor. It includes CDMA+ GSM chip which works according to varied location. Many other improvements are given as follows- 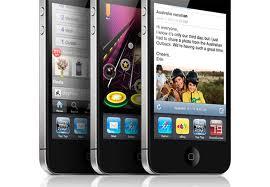 An improved version to Apple iPhone 4 i.e. Apple iPhone 4S comes with a high storage of 64 GB. It is Apple latest Smartphone in which no dimensioning and technological changes takes place. It is only speed and storage which is improved in Apple iPhone 4S. Apple still away from NFC chip technology which works same as that of Bluetooth technology and transmit data between smart phones when connected physically.

It is Apple iPhone 4S camera which also undergone pixel improvement to get better camera view. A new processor is implemented so as to enhance accessing speed. Addition of processor has increased the downloadable speed as well. This device has got many updates to Apple iPhone 4. All these updates are mentioned as follows-

It is easy for iPhone 4S users to roam between various countries because both CDMA and GSM network provision is there in the Smartphone. In case you are in CDMA network area then you can switch your sim to CDMA network or else to GSM network. Apple iPhone 4S battery life will works for 8 hours which is showing improving significance in comparison to Apple iPhone 4.

I think Airtel and Aircel have listed iPhone 4S on their website at a really high price. I don't think it is worth spending Rs. 44,500 for iPhone 4S. I would have bought iPhone 4 instead because Siri can work on both.