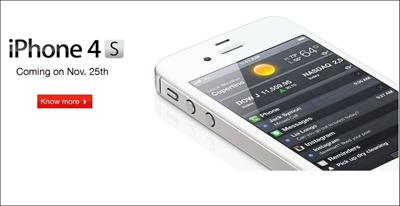 The news of Apple iPhone 4S launch in India has kept the iPhones fans to dream of having the most expected handset in their hands. Excitement rows up youngsters as the launch date is getting near. According to reliable sources Aircel and Airtel would be launching the iPhone 4S in India on November 25. The official website of Aircel has even declared that pre order booking would start on 18th November 2011. Even though the exact price of the handset is not announced officially, it is expected that 16GB one would be available at a price tag of between Rs 35,000 to 40,000. To attract more customers Airtel and Aircel might bring up better data plans.

The Apple iPhone 4S is rocking around the globe which had been the best ever selling handset of the company getting huge response from fans. We have seen hundreds of iPhone fans queuing up in the Apple Stores to get the first touch of the phone. The iPhone 4S is an advanced version of the much popular iPhone 4. The 4S powered by a dual core processor has an advanced version of graphics chip and an 8 mega pixel camera. The best which iphone 4S offers is Siri, the personal assistant which recognize voice commands and assist the user to minimize the works to some extend. Siri has now become much popular even before the launch of 4S. The iPhone 4S fans in India are dreaming to have their experience on Siri which is expected to happen a few days from now.

Even the iPhone 4S got huge response in South Korea the land of gadgets which already have large fan followers for their home made products from Samsung and LG. India being the second largest mobile market next to China has become a paradise for electronics manufacturers to sell their products in short span of time. According to a report, the mobile subscribers in India have risen to around 602 million users at the end of October 2011. The biggest challenge Apple would have to face in India is the limited 3G network. Any way as most of the existing mobile service providers are trying to improve the 3G facilities in India we can expect that Apple iPhone 4S would find suitable position to sell their product in the country.

How to book iPhone 4S online

Aircel who have announce the arrival of iPhone 4S in India are making all possible ways for customers to make pre order for the device. As information from the official website of the company, interested customers can place order for iPhone 4S which starts from November 18.
Website: http://www.aircel.com/

iPhone 5 has released. Is it worth buying iPhone 4S now? Also, if I buy it from Aircel, is it compatible with other networks like Idea and Airtel? What I mean is, for example, I am buying one iPhone from Aircel. But later I want to switch to Idea. How can I use the same phone with Idea?