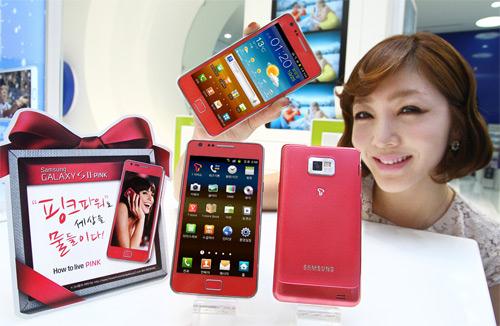 Samsung Galaxy S2 is one of the most demanded Android Smartphones in world. There were only two color options for these Galaxy S2 phones. They were black and white. Samsung considered Galaxy S2 as business phones and they settle with these colors. But many Samsung lovers, especially ladies requested Samsung for a fancy colored Samsung phones. So Samsung decided to introduce Samsung Pink Galaxy S2 especially to target the ladies.

Earlier Samsung Galaxy S was also released with vibrant color. Samsung named it as Samsung Galaxy S Famine edition. Now the Galaxy S2 has followed the same path of Galaxy S to attract ladies. Other than the pink color Samsung keeps all the features of Galaxy S2 phones. Samsung is sure that this pink Android phones will be accepted by ladies with wide hands. The quick features of Samsung Pink Galaxy S2 phones are Android 2.3.5, 1.2GHz dual core processor, 8MP rear camera, 2MP front camera, and 16GB Internal memory.

At present Samsung Pink Galaxy S2 will be available only in South Korea, the native place of Samsung. But it is expected that the mobile will be released in all over Europe, USA, UK, India and Gulf countries.