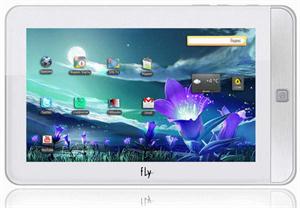 Tablet PC's are trending world wide with the arrival of more and more companies are bringing up their share in the market. Almost all companies which manufacture computer and mobile related products are now competing to introduce tablets. Adding more fuel to the tablet market, comes the 'Vision' Android Tablet from Fly mobile. Being the second cheapest tablet available in the market, Vision aims at consumers who look for tablets at an affordable price. Google's Android 2.2(Froyo) OS installed in the 'Vision' runs on 600MHz Rockchip 2818 chipset processor.

Being a 7 –inch tablet with TFT touch screen the 'Vision' is expected to compete with Beetel Magiq. Weighing just 350 grams,this tablet has 256 MB RAM. The Vision supports Bluetooth and Wi-Fi, GPRS and 3G. According to the company the 'Vision' could run continually for 6 hours with a single battery charge. Having a 1.3 mega pixel camera, would be ideal for taking pictures and viewing videos. The memory can be expanded up to 16 GB using a microSD card. Using a Bluetooth headset or a handsfree kit making phone call is possible. Pre installed applications like Office Suite and Google applications are available in this tablet. Few other applications like e-reader, video player, social networks etc are integrated in Vision.

Being priced at Rs 7,299 the 'Vision' would be ideal for customers who wish to buy a budget fit tablet. Beetel Magiq which had hit the Indian market at an attractive price tag is now the best competitor for Vision. But the Indian baby Aakash priced at around Rs 2,999 would give a touch competition when it gets commercially available in the Indian market in December 2011.
So this cheap Android tab would be a gift for those who could own a tablet with out giving much pain for their pocket.

One thing is true that the tablet manufactures had been eyeing the Indian market as a golden goose. So the gadget sellers are competing with each other to satisfy the consumers with products of low cost.

As on now there are around 10- 12 companies who had invested money in bringing up tablets. The time will prove how many of them have proved to win the race.