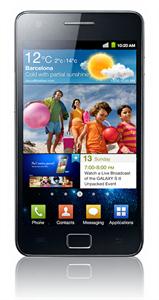 Samsung Electronics, one of the top manufactures of mobile phones has recently announced the sales figures of their much popular Galaxy Series Android smart phones. As per the company the sales of the Samsung Galaxy S1 and S2 has crossed 30 million at the end of September 2011. Launched in June 2010 the Galaxy S had been sold around 20 million units world wide while the Galaxy S2 had reached 10 million users. So the combined sales of the galaxy series smart phone reach 30 million last month.

Being placed second in global smart phone vendor shipments next to Apple, the sales of Samsung smart phones have an upper hand in the international market. In the last one year the popularity of Samsung mobile phones had gone up with its smart application and progressive steps in innovation have brought satisfied customers reach Samsung mobile stores. In the international market, the Galaxy series are giving a tough competition to Apple's much fame iPhone series mobiles.

Apple which launched its iPhone in 2007, had crossed 100 million sales recently. With the arrival of iPhone 4S, the sales are expected to go more which will give an upper hand for Apple in the mobile market. The sales of Nokia recorded 16.7 million while HTC had managed to sell 12 million units. LG electronics had sold around 6 million units and Motorola had managed to shipment more than 4 million phones.

According to Samsung Electronics, Galaxy S is the favourite among smart phone users and Galaxy S2 is becoming the darling choice of customers which had sold around 10 million handsets in very less time. The company claims that a unit is sold every second and the awards which had followed substantiate this statement. Just recently the Galaxy S2 had won a couple of awards which include the 'Gadget Award 2011' for the 'handset of the year' and the 'Mobile Choice Consumer Award 2011' bagging 5 awards which include the award for the 'best phone of the year' too.

The Galaxy series had helped Samsung to get an edge in the mobile market. This stepping stone had brought Samsung to expand their presence in the global smart phone market which makes them reign in Korea and also aim to dominate the markets of Europe and India. India is one of the most valuable market for mobile and other gadget manufactures.

Now things are much clear as the Samsung smart phones are on to the race to go up in sales chart as the company is counting on to release of their other smart phones which include Samsung Galaxy Nexus and Samsung Galaxy Note. With the unveiling of the successor of S2, the Galaxy S3, it's sure that Samsung will reach more heights in the coming days.