The Cell phone war continues as the best 2 phone manufactures Apple and Samsung are having a positive rivalry to be in the first slot of share profit in the business market. Samsung has succeeded in bringing down the dominance of their archrival Apple as they expand their business to new countries. Adding a feather to the success cap of Samsung, the T3 had named Samsung Galaxy S2 as the best phone of 2011 much ahead of Apple iPhone 4. The Galaxy S2 has even got applause from critics too. 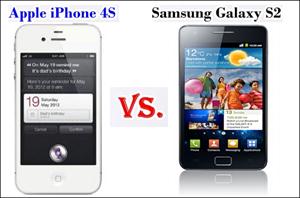 Now it is time to have a complete comparison on the specification and features of both the devices. Samsung galaxy S2 has a dimension of 125.3 x 66.1 x 8.49mm which weighs 117g while the Apple iPhone 4S dimension is 115.2 x 58.6 x 9.3mm weighing at 140 g. Being on the top list of best manufacturers to produce mobile phone display, the Galazy 2 has a much fascinating and eye blowing AMOLED display which is far better than iphone's Retina Display. Apple has not made any change in the display which had been used in iPhone 4. The Samsung S2 display is having a resolution of 800 x 480 pixels. Coming to the performance of the processor, Galaxy S2 has a dual core 1.5 or 1.2 GHz processor while the Apple iPhone 4S has a dual core A5 processor but lacks 4G. So here too Samsung S2 wins.

Both Samsung Galaxy S2 and iPhone 4S comes along with 8 mega pixel camera. But here Apple seems to have a better quality camera function compared with Galaxy S2. Finally coming to the internal memory, Apple iPhone 4S has doubled its memory compared to Samsung Galaxy S2. There are 3 version of IPhone 4S ie. 16GB, 32GB, 64GB. But the Galaxy S2 is only loaded with 32 GB inbuilt hard disk.

Now the question is What is your choice – Apple iPhone 4S or Samsung Galaxy S2 ?