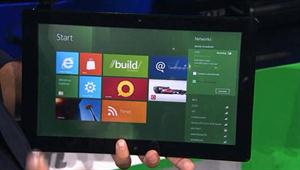 The Microsoft Windows 8 BUILD conference was held at Anaheim, California from 13th September to 16th September,2011. The first Windows 8 tablet from Samsung was unveiled on the first day of this conference. It is an amazing event to show this first tablet running Windows 8 Operating system.

The developers who attended the conference were lucky enough to get a copy of the Windows 8 and also the Samsung tablet free of cost. The design of this tablet from Samsung is a special edition of the Slate PC Series 7. This tablet is using the Intel Core i5 processor and not the ARM processor.

The Windows 8 tablet from Samsung has quite impressive specifications. This tablet has a 11.6 inches touch screen and the display resolution is 1366 X 768 pixels. The tablet runs on Intel Core i5-2467M 1.6 GHz dual-core processor and has 4 GB RAM. The tablet has a 64 GB SSD storage and can be connected to 3G mobile broadband networks. Here are some of the specifications of the first Windows 8 tablet from Samsung.

If the memory is not enough, you can expand it upto 32 GB with Micro SD card.

The presenter for the Connected Standby (CS) session stated that this hardware did NOT support CS.

That means it could support Metro apps keeping their info up to date while the tablet was asleep. This is what phone and moden tablets OSs do.