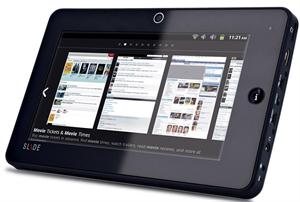 The iball slide tablet has a 7-inch capacitive multi-touch display, along with a 2 megapixel front camera with USB host and HDMI output. The tablet comes with an in-build memory capacity of 8 GB expandable up to 32 GB. According to the company, the 4400 mAh lithium-ion-battery will provide up to 6.5 hours of music along with 5 hours of video. The iball slide tab supports HD quality videos and 3D games. The iball tab comes to India which is priced at Rs 13,995. The tablet features almost all facilities like web browsing-mail, chat, social networking, gaming, visual search and much more.

Bollywood superstar Hrithik Roshan is the brand ambassador of the iball tablet.

It has now become a trustful competition as the new entry iball slide budgeting less than 15,000 has entered the tablet market. Beetel magiq tablet priced at Rs 9,499 which is doing well in the market. The iball slide would be the fourth tablet launched ranging between Rs 10,000- 15,000 category. The company plans to make the slide available all over India in the coming days.