It is in news that Reliance communications, a big telecom based company in India which is lead by Anil Ambani has announced a 7- inch Android tablet which is cost around Rs 13,000. It is provided to customers with a discount offer that given 3G data options to subscribers such that customers can enjoy the experience of cheapest 3G enabled tablet in India. When we compare other tablets with Reliance 3G tab then it is predicated to be cheapest tablet of all times.

It basically runs on Android 2.3 Gingerbread that allows users with multi-tasking ability through which you can enjoy multiple windows accessing in single mobile device. As far as operating capability is concern then it is no more consider being older version model. It is developer's hard work that updates Android 2.2 to Android 2.3.

Reliance communications also implemented 2 megapixel rear camera and a front camera that allows users to make video call from Reliance 3G tab tablet. The dimension of Reliance 3G tab is also pretty impressive i.e. 7 inches in size and much like the first Samsung Galaxy Tab. It also has inbuilt GPS and a card reader support that is supportive with 32 GB of micro-SD card storage.

Usually, Reliance tablet is consider light in weight as its weight measure around 387 gm which is quite same as that of Samsung Galaxy 7 inch(381 gm). It has attractive look because of its multi-touch capacitive screen which is far better than other cheap tablets that resists touch screens. 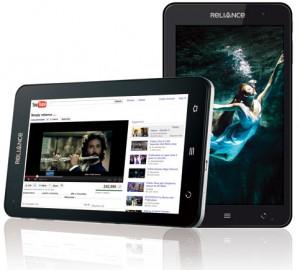 It's all about its pricing which make it distinct from other tablets because it will be provided to customers at a cheap rate of Rs 13,000 which is quite less in comparison with Apple iPad 2, Motorola Xoom and Samsung Galaxy tab. Its processing capability is not too much heavy nor too light but consider to be at mediocre level.

The Reliance has added data features in its tablet interface that include Internet Email checking, social networking, live video streaming, gaming mobile TV, voice calling, GPS and video recording. It is launched in many parts of India like Mumbai, Delhi and Kolkata and available across 13 3G circles in next few days.

If you like to surf on the internet and willing to purchase cheap Android tablet then Reliance 3G tablet offers a discount of 40 percent on 12 months subscription on 2GB data usage. If you prefer to be a monthly customer then you still get the 2 GB plan for Rs 600 against Rs 750 per month. Many other plans are also available on Reliance communications website.