It is high time to play with new technological products available in competitive market since a lot of innovative products are launching day by day. The companies like Samsung, Apple, Google and Microsoft rocking in Smartphone manufacturing with their better operating system interfacing. In India, there is a great competition between Samsung Smartphone, Apple iPhone and Android devices. The Samsung Galaxy S2 is going to launch in Indian market very soon. While reviewing Samsung Galaxy features, we come to know that most of its features are similar to Apple iPhone 4. So, here we are taking comparative look over Apple iPhone 4 and Samsung Galaxy S2(II) Smartphone. 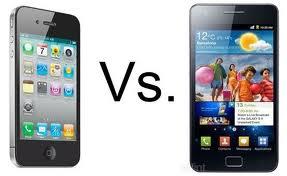 In year 2011, Samsung announced its second generation mobile phone, at MWC event. The specifications were more tempting and indulgent. After getting a confirmation from gadget sites, both Samsung Galaxy S2 and Apple iPhone 4 provided head-to-head on the basis of technical specifications.

When talking about processing capability, Galaxy S2 processor includes 1 GHz dual-core 1 GB RAM whereas Apple iPhone 4 has Apple A4 with 512 MB of RAM. Samsung Galaxy S2 set has better ability to produce high quality photos and videos due to its 8 Megapixel rear camera. It also contains a 2 Megapixels front camera with 1080p video capture capability. Whereas Apple iPhone 4 has only a 5 Megapixel rear camera and a front VGA camera with 720p video capture.

In price, Samsung galaxy S2 is cheaper than Apple iPhone 4 sets. Moreover, after taking a comparative look over all features of both Smartphone, we can say that Samsung galaxy S2 is thinner, faster and more powerful to take pictures and videos on a wide display screen.