We know that both Microsoft and Apple are tough competitors in every technology field that relates them. When we are talking about Smartphone's technology then Windows phone 7 and Apple iPhone have tough competition between their tablet interfaces. While surfing on the internet, I came across a heading that shows Microsoft OneNote in Apple iPhone 5. I get startled after seeing this heading and again searched for the same topic just to verify whether I have seen right heading or is my eyes gone wrong? But after getting its complete review, I came to conclusion that it is Microsoft inter-operable environment that allows Microsoft OneNote for Apple iPhone 5 Smartphone. 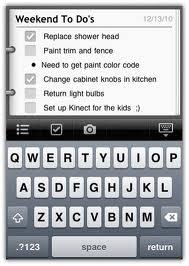 It is basically released as most famous OneNote apps for Apple iPhone 5 for allowing iPhone to expand its operation in every educational field that allows customers to enjoy readability in mobile environment. This program is the part of the office suite which is added in iPhone 5 as a request of the customers to make notes for the meetings while going. Its not about storing notes on your mobile but also concern with more additional features of uploading your notes to Microsoft's cloud storage service SkyDrive for Windows Live Id support. You can even share your notes on the PC and desktops.

OneNote users can able to view and edit their notes on OneNote cloud app that allow users to access services from Microsoft's Office Live. It is easy to use note taking application for capturing your thoughts and searching them with text, pictures, bullets, numbers and checkboxes. During accessing, make sure that OneNote are properly synchronized with Windows Live SkyDrive cloud services. You can even manage its synchronized environment from the desktop PC or even from the internet browser.

It is released in year 2003 under Microsoft office suite when touch interface is not available but now it becomes a strong commonplace. It is basically a means of assistance for professionals and students who need to access notes. Many people consider it good for iPhone 5 because if we lack OneNote support on the Mac then there may be chances of getting damage to apps of picking serious errors in Smartphone device. If we take history of Microsoft products then there is long history of developing Office products for Mac. In next month, Microsoft is planning to include Lync communications in iPhone 5. OneNote will be available to download freely on the iPhone device, most probably after 30 days.