It has four-inch Amoled touchscreen, five megapixel camera and lot of entertainment features, the Samsung Omnia 7 really has got the lot.

As with all Windows Phone 7 handsets, the Samsung Omnia 7 is the very definition of a modern communications device. In this phone, to stay in touch with your friends and family all your profiles and contacts are organised in one place that is easily accessible from the home screen of the mobile. With this feature you will also be able to update your Myspace, Facebook and Twitter profiles seamlessly and you can keep up yourself up to date with everything that is happening in your social network. With the four inch display, it is a joy to view movies and music videos while you were on the go via the onboard media player. you can play lot of XBOX 360 games with this phone.

With five megapixel camera with autofocus and LED flash, you can take a super snap every time. You can also record video in high definition.

You can access to thousands of great apps and games at Windows Marketplace , a 1GHz processor for super slick multi-tasking, built-in Zune music and video player, etc.,

When you compare these features with other Windows 7 phones, you have to pay more amount than Omnia7. So we can say Omnia7 will be in the first place for Cheap Windows7 phone.

HTC 7 Pro has a brilliant intuitive user interface of a Windows Phone 7 smartphone and a handy physical QWERTY keyboard for fast text entry. with the tile-based interface you can group similar features together on your home screen. With this phone it makes incredibly easy to get to the functions you want when you want. It has five megapixel camera with face detection and geo-tagging that records in 720p high definition.

With the 3.8-inch touchscreen and dolby digital sound makes HTC 7 Pro a rare pleasure to watch movies on the built-in media player. The Apps which are available in the Marketplace works perfect with this smart phone and many apps were specially designed for this phone. You can play excellent games with this phone. Apart downloading from the Marketplace, it has many default installed features in phone. It also has GPS support and Bing Maps for satellite-navigation style route-finding, PocketOffice and a 1Ghz processor to keep everything run smoothly.

You can find all the above features with cheap rate when compared to other Windows 7 phones. HTC 7 Pro is one of the strong contender in the cheap Windows 7 phone race.

HTC 7 Mozart is a Windows 7 based phone, which is great for entertainment, gaming, social networking. It also has a great eight megapixel camera, with a Xenon flash with auto focus and face detection technology to help you get the best image possible. It is also capable of recording high definition videos. It has a gorgeous 3.7-inch touchscreen.

HTC 7 Mozart is fantastic for apps. You can go to the Windows Marketplace and you will be able to choose from a massive selection. You can download many of the applications free from the market place. With the system of hubs, you can get easier grip to the features of the phone. Hubs are themed centralised locations for different features of your phone, with one set aside for gaming, another for social networking and others for entertainment and photos

It has accelerometer for motion-controlled gaming and multi-touch gesture recognition control.The main feature is, it is powered by Qualcomm Snapdragon 1Ghz processor.

It can give touch competition to Omnia7 and HTC 7 Pro. Since it has maximum features and it comes for a cheap rate when compared to other Windows 7 based mobiles. 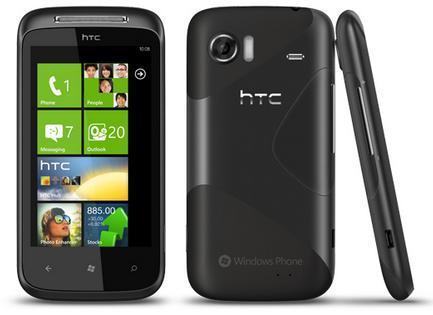 To know best free Windows 7 apps, you can click here.

Read this article to read the spec showdown between two Windows Phone 7 smartphones- Nokia Lumia 900 & HTC Titan II and decide for yourself which smartphone suits your needs better. Read the cost, features and specifications of both the smartphones in this article