Google has recently announced a Pilot Program for its new notebook PC 'Cr-48' which have been unveiled for test purpose only. This is the first notebook of its kind to feature the new Google Chrome OS and is accordingly known by the name of Google Chrome Notebook by many. As a test project, this notebook is intended to be delivered to the participants of the pilot program for free and in return collect the valuable feedbacks regarding the various features and functionalities from the users. Since this notebook is based on new features and design along with a new operating system too, Google expects the same to be perfect enough to meet the expectations of the various category of users before it is commercially made available and is hence distributed for testing among the selected citizens residing in United States. Google Cr-48 Chrome Notebook is unique of its kind and the Chrome OS or Chromium OS speaks all about the usage concerning the internet and World Wide Web. This being one of the subject of the pilot program from Google is not meant to be a commercial product which would be available for sale in stores even in the days to come but instead is available for selected users only to be a part of the testing phase of their new operating system which is still under development phase as of now. The product bears a simple and attractive design without any logos or labels as found in most notebooks which are commercially available. Although simple in design, it comes bundled with a lot of features and some very good technical specifications which all makes it quite impressive and worthy to achieve wide acclamation when released officially.

The Chrome Cr-48 notebook has many outstanding features built into it and also come with the latest standards and specs built-in to this notebook. However each and every aspects related to this notebook features some unique characteristics than the other notebooks or laptop PC available in the market now-a-days. So, following are the key specification of Cr-48 Chrome Notebook which is introduced by Google:- 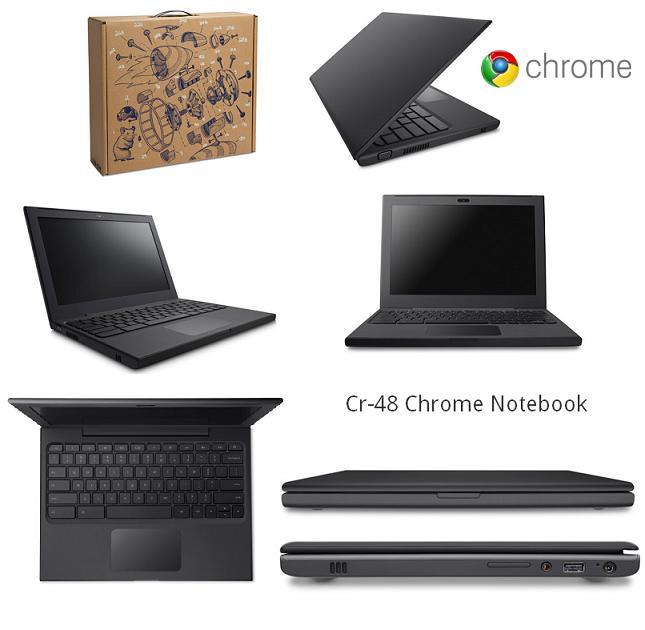 The Google Cr-48 Chrome Notebook is actually a part of a pilot program and is introduced as a test product which is made available to selected applicants who have applied for it. This is not a free gift from Google doing favor to lots of enthusiasts users but instead also comes with many responsibilities on their part. They expect every selected participant to provide feedbacks regarding the various functionality and thereby report in brief with all the details regarding various bugs that they have encountered in using different features covered within it. They have some limited number of this Cr-48 Chrome Notebook to distribute and the participants are selected considering various categories and usability patterns or groups of users. The eligibility criteria is generally set as being a resident of United States and belonging to the age group not less than 18 years. You may also need to mention your category of use such as business, education, developer, non-profit or Individual category and accordingly apply for being a part of this pilot program. The last date however is fixed to be 21st day of December, 2010 and all entries must reach them on or before 11:59:59 PM PST of the specified date to be eligible for review of the application. Once selected, they will contact you and mention various steps to be taken to avail the test drive of the Cr-48 Chrome Notebook for free. In return, they only expect that you use it frequently for many hours of the day and perform all the daily task through it and then prepare a very detailed and systematic report of the various features that are missing or any bugs which are detected while using it.

The Google Cr-48 Chrome Notebook is the new product which was recently made available by Google for offering free test drive to many enthusiasts who has applied for participating in the pilot program. This very notebook from Google comes with new features and extended capabilities which are all unique of its kind and may not be among other regular notebooks available in the market. It has been targeted for a different purpose and includes many interesting features for the users to enjoy and make use of. Some of the key features can be mentioned as follows:-

The Cr-48 Chrome Notebook from Google is hereby one new step towards revolutionizing the web experience within a notebook. It provides many good and unique feature which really stands good among all other notebooks and since it is only a test product which is a part of the Google Chrome Notebook pilot program, we can expect many more features to be added to it and finally bring in a more enhanced product and offer good usability aspects and various innovative features and support within the commercial version of the Chrome notebook which is scheduled for release within the mid 2011

"...The storage capacity is however very minimal at 16GB Solid State Drives from Sandisk as compared to what is offered with netbooks but here again it is acceptable keeping in mind that this is only pilot program product to test the various features only..."

Keep in mind the small storage drive is also due to the fact that the base concept of Chrome is that a user live in the cloud. This means files are not saved locally. There really is very little need for a storage drive other than for the operating system. Personally I am surprised there is as many as 16GB in the Cr-48.