Microsoft India Language Input Tool is one of the best Input Method Editor for working with the Indic languages like Bengali, Gujarati, Hindi, Kannada, Malayalam etc. in our documents or other web resources. Infact, it can be used in any other purpose where we need to input the text in a particular Indo-Aryan languages for satisfying various requirements as applicable in our daily working schedule. It provides the easiest way to work with the various patterns of indic languages when needed to be included for specific purpose which are actually done through transliteration i.e. the transition from one type of alphabet into another of its kind. This means that the text which you would type would not be translated but would rather be converted to its equivalent alphabets belonging to another compatible language which is basically done in a phonetic manner. This very property of being phonetic in nature to type any other Indian language is the featured service that it has to offer because it involves no pain in learning the various keyboard layout of each individual language that we need to work with. Instead, it can be easily worked with by typing all the words and sentences in English with just pronouncing the said word in the native language in which we want our text to appear. This implies that we are not dealing with the meaning of the word which is generally the case with the process of Translation but instead we are working with pronunciation of the actual word in any specific Indian language that we want to make use of. For example, if we want to type 'लगे रहो' which is based on the Hindi Language, then we have to type-in the equivalent pronunciation in English such as 'Lage Raho' and the same would be converted to its form in Hindi. This way we can also manage other Indian languages which are by now around ten of them which can be made use of within the Microsoft Indic Language Input Tool. There are also two versions available which are both meant for different purpose such as the Web Version which is intended for being used in online websites or blogs and the Desktop Version which can be used in the computer for using it with text editors, word processors and various applications or any other Microsoft Products.

The Web Version of the Microsoft Indic Language Input Tool can be used with various popular web browsers like Internet Explorer, Mozilla Firefox, Safari, Google Chrome or Opera. The Desktop version, on the other hand is compatible for use with almost all the variants of Windows Operating such as 32-bit Windows XP SP2 or higher, Windows Vista and Windows 7. The system requirements which is set for it is not much and includes only a 512 MB RAM and a 1 GHz Processor which can be both of the type 32-bit and 64-bit. However, it has some additional software requirements too such as the Microsoft .NET Framework 2.0 and Microsoft Windows Installer 3.1 for proceeding with the installation process without any error. 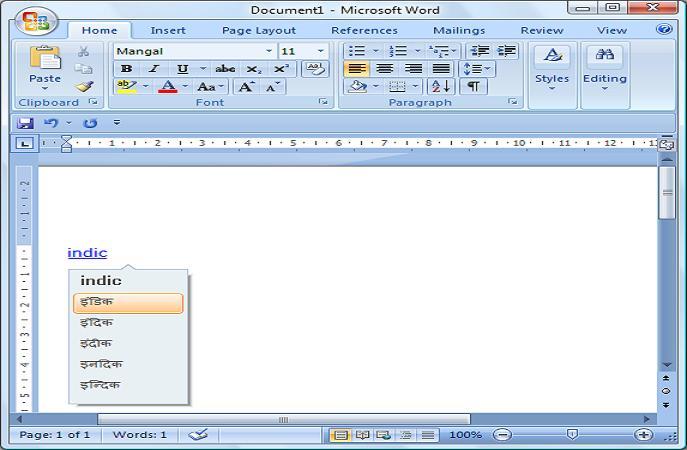 Microsoft Indic Language Input Tool in Windows XP needs to be enabled after installing it into the computer. In order to do so, follow the steps as mentioned below:-


How to use Microsoft Indic Language Input Tool in Windows XP

After enabling the MILIT in Windows XP, you can use it to type in your native language in any of the text editor or word processor of your choice. The steps involved in using it are as follows :-

How to use Microsoft Indic Language Input Tool in Windows Vista

In Windows Vista too, you have to enable the Language Bar in order to proceed with using the Indic Languages for typing in any application. After having enabled the language bar, you can simply proceed in the similar manner as used with Windows XP to type using the selected Indic language. The steps involved in accomplishing this task are as follows:-


How to use Microsoft Indic Language Input Tool in Windows 7

Enabling and using the Microsoft Indic Language Input Tool in the latest Windows operating system i.e. Windows 7 is exactly similar to the procedure mentioned for Windows Vista above. You may proceed in the same manner and activate the Language Bar for the Desktop and then select the preferred language from the Language Bar which will then be available on the taskbar. After doing so, you can proceed with using any installed Indic language for using it within any Microsoft Products and other software and applications which accepts text input from the user.