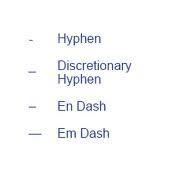 Microsoft Word gives us three types of Hyphens and two types of Dashes. If we know the difference and usage of those Hyphens and Dashes, we may utilize the same to a greater extent correctly. Let us discuss the various types hereunder:

1. Regular Hyphen: This regular Hyphen can be had by just pressing the Hyphen key in our keyboard. This Hyphen is available next to the digit 0 in our keyboard. Many of us, use this key as Dash key. When we use compound words in English, we should use this Hyphen. For example, the word 'mix-up'. If such words appear at the end of a line in Word, then the second part of the word would appear as the first word in the next line. The first part of the word and Hyphen will stay only in the first line.

4. En Dash: This is also known as Typing Dash and it will occupy the space allotted for a single alphabet viz., 'n' and therefore the name. This Dash Key is generally used to denote the numeric range between numbers. For example the number range from 3 to 10 can be denoted as '3-10'. To get this Dash key, we should type 'Control Key + the minus Key in the numeric Key pad or Alt Key + 0150 in the numeric key pad' of the Key board. If required, Word will separate only the second number or part of this En Dash and this En Dash will be found attached only with the first number or part.

5. Em Dash: This Dash key is named as it occupies the space for the alphabet 'm' while using the same. But the display may vary according to the Font Type. Generally its expected to occupy twice the space allotted for En Dash Key. This Em Dash is generally used in sentences and mostly if you want to convey a converse meaning to your previous sentence, this comes handy. To get the Em Dash, we have to type the Hyphen key two times in Word. If we wish to have the same Em Dash in some other method, we can use 'Control Key + Alt Key + minus Key in Numeric Key Pad' or we have to use 'Alt Key + 0151 in Numeric Key pad'. As observed earlier this Em Dash too will stay with the first part of separation and the second part will go to the next line.

This is the method to use Hyphen and Dash in Microsoft Word to have proper effect.

Microsoft launches new version of its Office suite, Office 2010. The publisher has made many innovations, such as integrating video on presentation material, and management of social networks from the Outlook email. A light version ("Office Web Apps"), available free online, is also proposed.

Changing the settings of an email account in Outlook 2010

Several reasons may require you to change settings for an email account: The password assigned by your ISP changes, the mail server or security settings you want to change or customize settings, such as how your name is presented to other users. Let us see in detail how to modify the settings of an email account in MS outlook 2010.

How to Use the Indian Rupee Symbol in Microsoft Office?

This article is a review to Microsoft OneNOte which Mr. Bill Gates himself admits to use as an organizing software

What are the benefits of using the Microsoft Office 2010?

In this article, I will explain to you what are the benefits of using Microsoft Office 2010 as compared to other programs or other versions.